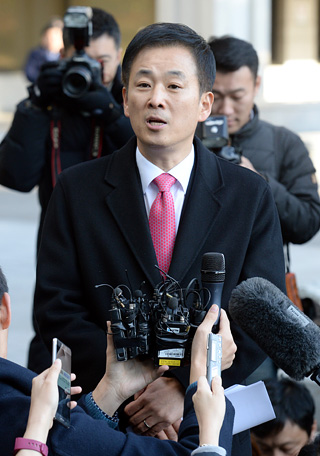 A lawyer for President Park Geun-hye demanded prosecutors postpone their questioning of the embattled president, saying it was physically impossible for him to prepare for what will be the first ever questioning of a sitting president in such a short period of time.

President Park, whose presidency is at risk amid a scandal over the influence exerted by her friend Choi Soon-sil, hired defense lawyer Yoo Yeong-ha, a former prosecutor, on Monday as prosecutors geared up to question her about a variety of allegations, including her involvement in Choi’s alleged meddling in state affairs.

Standing before reporters at the Seoul High Prosecutors’ Office Tuesday, Yoo said he had been hired as Park’s lawyer a day before and it would take him at least a week to prepare for the questioning of the head of state.

“Prosecutors gave notice of the questioning schedule unilaterally and asked me to follow it,” Yoo said. “If I was ready to do it, then I would. But I just got hired yesterday. It will take me a considerable amount of time to go over all the facts in the case.”

Prosecutors expected to sit face-to-face with the president on Wednesday.

When asked whether his client would be ready next week, Yoo said it was impossible for him to answer at this point.

In response to Yoo’s demand, the prosecution said they could delay the questioning for a day - to Thursday - and emphasized the necessity of a face-to-face meeting with the president.

Yoo is known as a loyal supporter of President Park. Yoo, who began his legal career as a prosecutor after passing the bar exam in 1992, ran for lawmaker three times starting from 2004, all of which failed. Park endorsed him all three times. He entered private legal practice in 2004 and served as a member of the standing committee of the National Human Rights Commission.

Prosecutors were hoping to question Park on Wednesday so that her testimony could be reflected in an indictment of Choi Soon-sil, who has been questioned since Oct. 31. Prosecutors need to indict Choi by Sunday. Her detention warrant expires that day.

Because a Korean president enjoys immunity from criminal prosecution, Park cannot be charged while in office except in cases of insurrection or treason. But the president can be questioned either as a witness or a suspect in a criminal investigation. Prosecutors said they were planning to question Park as a witness but would inform her of her right to remain silent. That is an indication that while she is not the subject of a criminal probe now - in which case she would be questioned as a suspect - she could be in the future.

Should she be notified of her Miranda rights before questioning, her responses can be used in a criminal proceeding in the future.

Legal and political analysts expect prosecutors to grill Park on an array of allegations, ranging from Choi’s influence peddling and acquiring of classified information from the Blue House without security clearance to the strong-arming of 77.4 billion won ($66.3 million) in contributions from 53 conglomerates to two nonprofit foundations virtually created and managed by Choi.

On the leaks of classified material, Park is expected to be asked how drafts of presidential speeches ended up in Choi’s tablet PC and whether other classified information on foreign relations, national security and personnel management was also leaked to her.

Park is also likely to be asked to describe one-on-one meetings with the heads of seven conglomerates in July 2015. She is suspected of pressuring the tycoons to make contributions to Mi-R and K-Sports foundations, which amassed a staggering 77.4 billion won in just a few days after they were launched.

Accelerating the investigation into so-called Choi-gate, prosecutors questioned Lotte Group Chairman Shin Dong-bin on Tuesday to ask about a one-on-one meeting with Park in February. Lotte, which was swept up in a far-reaching investigation into business malpractices and embezzlement earlier this year, donated 4.5 billion won to the two foundations. It later made another contribution worth 7 billion won, which was returned to the company just a day before prosecutors’ raids into Lotte Group in June.

In a widening investigation, prosecutors raided an office of Cheil Worldwide, the media and advertising affiliate of Samsung Group, located in the company headquarters in Seocho District, southern Seoul, on Tuesday. The ad unit is suspected of giving business favors to Jang Si-ho, a niece of Choi Soon-sil.

Prosecutors will probably question President Park to make a case of third-party bribery. Third-party bribery is when a government official, in this case Park, imposes undue pressure on a third party, conglomerates in this case, to provide graft at the illegal request of someone else, which would be Choi. Prosecutors believe the conglomerates made the donations to the two foundations expecting business favors in return.