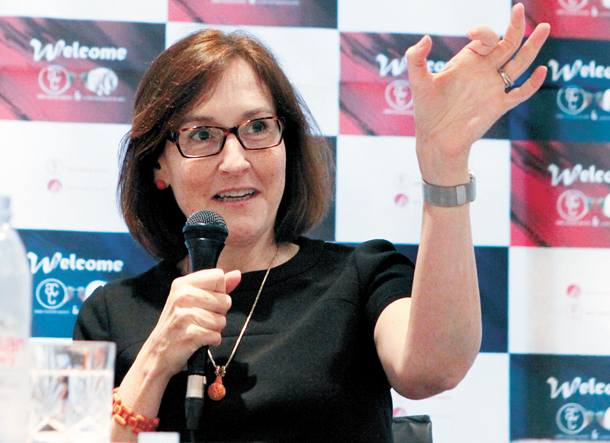 The ACC has given grants to more than 150 Korean artists and scholars since 1964. During a press briefing Monday at Namsan Arts Center in Jung District, Seoul, O’Neill shared her philosophy of philanthropy and shed light on some of Korea’s philanthropic practices that often fail to work independently from the government.

Recently, the media reported that the largest corporations were allegedly pressured by the current administration to fund two foundations as part of the so-called Choi-gate.

“We are lucky to never have received any kind of pressure from the U.S. government or any other governments,” said O’Neill, “although we cooperate with the government when it is beneficial for us. We have built a partnership with the government and received their support from time to time out of a belief in our mission [to support artists and encourage cultural exchanges].”

She continued, “We work very hard to follow the best practices and avoid conflicts of interest. There are very tight regulations in the United States, as well, which guide philanthropic giving. I think philanthropy can sometimes play a role that the government and businesses can’t - we can take risks. I think the government takes a more conventional path.”

The following is an excerpt from Monday’s interview.

Q. Many people say that philanthropy is part of the Rockefeller DNA. What do you think encourages individuals and corporations to make contributions?

A. John D. Rockefeller Sr, the first generation [of the ACC], was a very religious man, a devout Christian. And he believed that his wealth should be used for the good of mankind. Even before he became wealthy, when he got his first job at the age of 16, he was giving away 50 percent of his money.

I think his first gift to Korea was about 150 years ago. It was part of his being and it’s also something that’s all been passed down to us through generations.

Is that related to the family’s education philosophy? If so, how were you taught to give as a child?

I was given a weekly allowance of 25 cents and had to give out 10 cents. I think it was natural and something that was expected of me. I always had to keep an account book to record how much I give to the charity and how I use the rest of my allowance.

Do you think Korea contributes enough to its artists? And as the ACC plans to build a Seoul base, what would you look for in making ties with Korean corporations?

We gave our first grant to a Korean artist Kim Whanki in 1964 so that he could come to the United States. Since then, we have given out over 150 grants to Korean artists and scholars.

And it is very much a hope that the ACC will continue to give grants so Korean artists and scholars can come to the United States and Americans can go to Korea. We’re very much impressed with the quality of artists in Korea and currently we give one to three grants a year to Koreans, and that’s not because there aren’t enough quality artists, but because of limited funding.

If you had to persuade those who have never given in their life to give, how would you do so?

I want to tell them that you get so much in return for giving. Meeting our former grantees, like professor Yoo, and seeing what he has done after his experience in the United States - it’s just moving. And to me, giving grants to people who have talents and vision is such an enriching experience. I want to say, if you give, you get much more in return.

What do you think it means for corporations to contribute specifically to arts and culture?

There is a relatively new practice called corporate social responsibility and this is very much something that many corporations have been proud about.

The ACC believes that engaging in socially responsible practices is about bringing people together and building meaningful, long-lasting relationships. The best way to do so, I believe, is through supporting arts and culture.