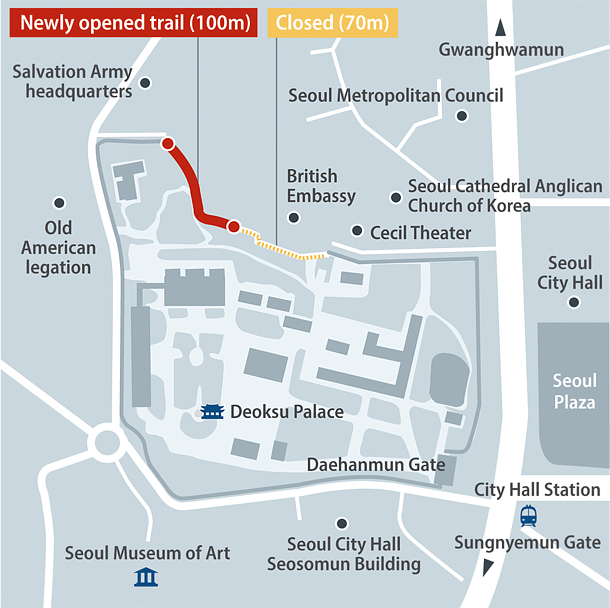 The Seoul city government announced on Monday that a section of central Seoul’s panoramic Stonewall Road, or Doldam-gil, at Deoksu Palace will be open to the public next year, after having been off limits for nearly 60 years.

The 1.1-kilometer (0.68-mile) road surrounds the palace, and of this, a 170-meter section that connects the front and back gates of the Embassy of the United Kingdom has been off limits; a 70-meter stretch was closed to ordinary citizens after the British Embassy was built next to the palace in 1884, while another 100-meter stretch, owned by the Seoul Metropolitan Government, was closed in 1959 at the embassy’s request. It is the latter that is set to open next year, in August at the earliest.

The Seoul city government in 2014 requested the British Embassy to consider opening up the 100-meter section to pedestrians, and in November that year Seoul Mayor Park Won-soon met with then-Ambassador Scott Wightman to discuss the initiative.

The Seoul city government and the embassy signed an agreement in May last year to pursue a safe opening of the section.

The final decision to open the 100-meter trail was reached last month after the British government sent a security expert in October of last year to assess the plan’s feasibility. The city government was also hoping earlier this year to open up the 70-meter portion of the road, but the embassy has decided against this for now.

According to the city government, the embassy voiced concern that “opening up the 70-meter section adjacent to the embassy will compromise its security regardless of how many security upgrades the building receives.”

The stonewall road, which encircles Deoksu Palace and runs through the heart of Jeong-dong, central Seoul, is frequented by local pedestrians and tourists and is close to other cultural spots in the area, including the Seoul Museum of Art and the Cecil Theater. Built using eco-friendly materials, the road is lined with over 20 benches and 130 trees.