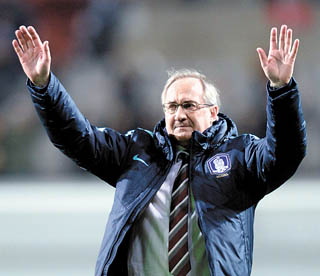 Korea defeated Uzbekistan 2-1 in an epic come-from-behind win, climbing up to second in the group standings and resuscitating its chance to take another crack at a World Cup stage. The win also boosted skipper Uli Stielike’s stature in Korea, which was hanging in the balance in recent weeks.

Korea, who is in Group A of the final round of the 2018 World Cup qualifiers along with Iran, Uzbekistan, Qatar, Syria and China, went into Tuesday’s game with its head held high.

After finishing a friendly against Canada on Friday with a 2-0 victory, and gaining confidence along the way, Korea, ranked No.44 in the latest FIFA rankings, hoped to take down the No. 48 Uzbekistan without much trouble. The odds were in Korea’s favor. Not only did Korea have the upper hand in its head-to-head record against Uzbekistan, with nine wins, three draws and one loss, but also, in the four times the two played each other in Seoul, Korea never even allowed a draw, winning all four matches. For the Uzbekistanis, playing in Seoul was as much a nightmare as Tehran recently was for Korea.

Also, Tuesday being Stielike’s birthday, whose stint with the Korean national team was on red alert after the team’s disappointing form in the previous qualifying matches, the players as well as the staff were determined to present fans, who gathered to root for the team despite the cold weather, a much-deserved home victory.

And they delivered, too, although it did not come without drama, leaving the fans anxious and on their feet until the last minute.

It was initially the Uzbekistanis that took the lead of the match. Despite Korea dominating every aspect of the game on the pitch, a single error by Kim Kee-hee, a defender, led to the brief slide of the team.

In the 25th minute, the center back tried to keep the ball away from Uzbekistan’s forwards, but his poor header led Korean goalkeeper Kim Seung-gyu to come out of the penalty box to clear the ball. But the ball landed by Marat Bikmaev, who flicked it above Kim Kee-hee and Kim Seung-gyu to bury it inside the goal line.

This left the audience as well as the players and coaching staff dumbfounded, and Korea was unable to escape from the shock for a while, their attempt to sink an equalizer coming up short or rejected by Aleksandr Lobanov, Uzbekistan’s goalie, constantly.

Stielike decided to shuffle the deck later in the second half, bringing in the 1.97-meter (6 feet 5 inch) Kim Shin-wook as his joker. And the lanky forward from Jeonbuk Hyundai Motors did not let the manager down.

After Kim Shin-wook stepped on the pitch in the 63rd minute, it took the Koreans only four minutes to finally nail an equalizer.

Park Joo-ho, despite being challenged by an Uzbekistani defender, sent in a floater from left which found Nam Tae-hee inside the box. Nam evened out the score with a header.

After equalizing the match, Korea’s Son Heung-min, Ki Sung-yueng, Koo Ja-cheol and Kim Shin-wook went on an all-out attack mode, trying to score the winner. By then, everyone in the stadium was on their feet.

It wasn’t until the 84th minute that Korea scored the decisive goal. Kim Shin-wook, befitting his role as a target man, headed down the pass that came from the center field, laying it down at Koo’s feet. Koo capitalized on the opportunity and netted his first goal in two months, salvaging Stielike and lighting a ray of hope along Korea’s path to Moscow.

After a few disappointing outings, as well as his controversial remark after the loss against Iran, Stielike came under fire by the local media and fans. A loss on Tuesday may have ousted him from the team. But instead, fans celebrated the win along with shouts of “Happy Birthday” appearing on the scoreboard after the match.

“We knew it wasn’t going to be an easy game from the start,” Stielike said during the post-match press conference. “The opponents had a solid defense, conceding only one goal in the past five games. But we’ve given out the first goal to them which made things difficult for us. But I am satisfied with my players for flipping things around. Even after yielding the goal, they remained cool, covering more ground than the opposing team. We had the overall control of the game.”

When asked about how his approach to the game differed from the Canadian friendly, he explained, “I had Nam and Koo in the center, which I have thought about for a while. So unlike the match against Canada [during which Nam and Koo played at either side of the flanks], I placed the players with good ball control in the center, thinking this would guarantee us dominate the ball possession.”

“The most points we could have earned is 15,” Stielike said, assessing the team at the midpoint of the final qualifying round. “To earn them all might have been an unrealistic goal but I think it’s important that we’ve retained the second-place spot. We can take a breather for now and prepare for the next matches.”

Elsewhere in Group A, China, who recently brought Marcello Lippi to the helm, ended their qualifying match against Qatar in a 0-0 draw, which put a damper on their hope for World Cup appearance. China is ranked at the bottom of the standings in the group.