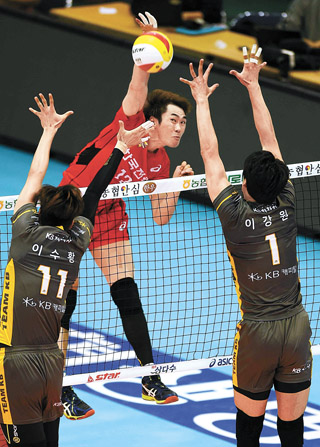 Suwon Kepco Vixtorm wing spiker Jeon Kwang-in, center, goes for a kill during a V-League match last month. Although Jeon is not yet at his peak physical condition, he leads the domestic players in the league in scoring. [NEWSIS]

The Suwon Kepco Vixtorm of Korea’s V-League finished last season at fifth in the league standings, suffering more losses than the wins throughout and failing to qualify for the playoffs. But that may not be the case for the Vixtorm this time around. It’s too early in the season to say anything for certain, but the Suwon-based club is at the moment ranked second in the league, posting five wins and three losses. The club is fired up not to repeat last year’s outcome, and the return of Jeon Kwang-in, a wing spiker and the team’s ace, may play a role in the Vixtorm’s run to the playoffs.

After giving the first set on Sunday to Seoul Woori Card Wibee in a 2016-17 V-League season match in Jangchung Gymnasium, Seoul, the Vixtorm regained their feet and took the second and third set. With the set score at 2-1, the Vixtorm were trailing 20-21 in the fourth set until Jeon scored with a kill to tie up the match. The Vixtorm finally broke through to clinch the set 26-24. After the win, the Vixtorm leaped from fourth to second in the league standings, going ahead the third-ranked Daejeon Samsung Bluefangs.

As Jeon was walking towards the reporters for the after-match interview, he was seen limping. It was quite apparent that his body is not at peak performance. Jeon, who has been also playing for the national team, had his last international success when he won bronze during the 2014 Incheon Asian Games. He suffers from pain in various parts of his body, including his left knee, lower back, ankle and shoulder. It was hard to believe that this was the player who just led his team to a comeback victory by putting 20 points on the board. “Compared to last season, this is nothing,” said Jeon, who added he was satisfied with the result of the game.

Jeon is one of the homegrown offensive talents that represent Korean volleyball, along with players such as Moon Sung-min of the Cheonan Hyundai Capital Skywalkers. Despite this, Jeon hasn’t had much success in the domestic league, with the Cheongju KOVO Cup in September being the first domestic competition he’s won in his career. Jeon was selected Most Valuable Player of the event then.

But what pleased Shin Young-chul, Jeon’s head coach, more than the trophy itself was Jeon’s physical condition.

Jeon last year wasn’t fully himself, largely because of the physical toll that his duty in the international team took on his body.

“I feel better than last year,” Jeon said. “I have come to realize that I have to learn how to lead this game even when I don’t feel so hot.”

What drives Jeon forward, it turns out, is the sense of responsibility he feels as the ace of the team.

This season, Jeon is ranked first so far in scoring among domestic players, ahead of the runner-up Choi Hong-suk of the Wibee by 25 points. His rate of successful attacks stands at 56.49 percent, second in the league after Thijs Ter Horst, a Dutch player for the Bluefangs.

“I want as many scoring opportunities as I can get, and they feed me some good balls,” Jeon said. “Coach takes my physical condition into consideration when planning the team strategy, so physically, I feel less worn out this year.”

And head coach Shin says there is no one on the team who can do what Jeon does, noting, “There is no Plan B.”