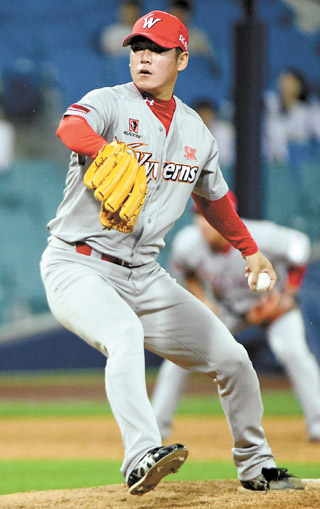 Park Hee-soo, closing pitcher for the SK Wyverns, is back in top condition and ready for another season. [NEWSIS]

The SK Wyverns’ flamethrower Park Hee-soo is back in business.

During the season this year in the Korea Baseball Organization (KBO), the southpaw reliever for the Wyverns posted a 3.29 earned run average (ERA) with four wins, five losses and 26 saves, a career high.

Pitching in 51 games, or 54 and 2/3 innings, throughout the season, Park finished the regular season ranked third in saves. The 2016 season was the first time he’s managed to take the mound more than 50 innings since 2012, a clear sign that Park has shaken off the shoulder injury that kept him out of most of the season last year, during which he only tossed in 14 games, or 10 innings. Although the team finished the pennant race sixth, failing to qualify for the postseason, Park’s return bodes well for next year as the Wyverns prepare with a new skipper, Trey Hillman of the United States, at the helm.

“I am glad I was able to play a full season,” said Park, who also was named in the final roster for the Korean national team at the coming World Baseball Classic (WBC). “But other than that, the season was full of regrets. A closing pitcher must be able to strike out as many hitters as possible with good ball control. I was unable to do so. The number of strikeouts I’ve collected in comparison to the number of innings I pitched in is rather disappointing.”

The 33-year-old veteran says he’s lost speed in his pitching. “I feel like I barely managed to shut down the hitters,” Park said, despite the fact that he’s enjoyed the peak of his career in an offense-happy season. “They came at it determined to crank one out against me. I’ve got to find my stability on the mound next year.”

Park’s ERA remained below .100 until May, but in June, it started to skyrocket, when he recorded 6.14 ERA. In explaining what happened, Park said the mental factor played a big part in his brief slump.

“I started to worry about the shoulder again and it really bothered me,” he said. “I was unable to throw as boldly as I should have. Early in the season, I had enough strength to throw balls at a high velocity but as I ran out of gas later in the season. I grew timid, I guess. I just wanted to throw safe.”

Park walked more batters than he did in the past few seasons, giving out a total of 26 bases on balls. But the reliever says it isn’t something to worry about. “I don’t care for it too much,” he said. “I threw it to the corner a lot, trying to lure the batters to swing. If they didn’t go for it, then it was fine for me. But I meant to throw them off the grid. It’s just a shame that I could not collect more strikes.”

Asked about his fastballs, Park said he believes they will come in time. “I know I am in my 30’s but I can overcome it through training,” Park went on. “I don’t have to worry about the pain anymore so my plan is to increase the intesity of training.”

And Park thinks, with all the changes that the Wyverns have seen since the season ended, he might as well consider this a new beginning for his team. But even with the new manager from the United States, baseball is still baseball.

“Communication might become difficult, sure,” he said, “but as long as we do things right and carry on what we do well, we should be good to go.”

After the season, the Wyverns signed Hillman, former bench coach of the Los Angeles Dodgers of the Major League Baseball and the first foreign manager in their history. He’s also had a stint in Asia when he oversaw Japan’s Hokkaido Nippon Ham Fighters from 2003 to 2007. With Hillman at the helm, the Fighters claimed the Japan Series title in 2006, the first time in 44 years.

“When I was first listed in the provisional roster for the WBC, I didn’t think I would make it into the final roster,” Park said about wearing the Korean uniform this coming March. “I did not expect it, but nonetheless, I am honored and grateful to be selected.”