Japan shuts down its monetary lab

Japan shuts down its monetary lab 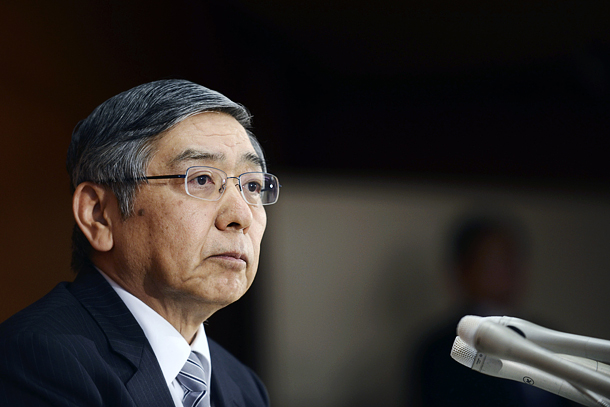 Japan’s great monetary policy experiment is drawing to a close, and the results may change the way the world thinks about central banking. The Bank of Japan’s recent quarterly report says, in effect, that the central bank has done all it can do to raise growth and inflation, and that fiscal policy needs to step in and help. The BOJ admitted that monetary policy alone won’t be enough to hit its 2 percent inflation target, now or ever.

This is very troubling for monetarists (as those who think that monetary policy is the key to macroeconomic stabilization are sometimes called).

And the BOJ had gone further than any other major central bank. Its quantitative easing program was bigger, and included large purchases of stocks in addition to bonds. It was more aggressive in its rhetoric, with Governor Haruhiko Kuroda repeatedly declaring that he would do “whatever it takes” to hit the inflation target. If any central bank was going to fulfill the dreams of monetarists, it was Kuroda’s BOJ.

For a while, it seemed to be working. Deflation ended and prices increased, with core inflation briefly rising to more than 3 percent in 2014.

But the honeymoon was short-lived — despite continued strong rhetoric and enormous purchases of stocks, the inflation rate fell back to zero in 2015, and deflation resumed this year.

Why did Japan’s bold experiment fail? One possibility is the impact of the dreaded zero lower bound (or ZLB, as it’s known). Nominal interest rates can’t go far below zero, because cash itself has a nominal interest rate of zero, so if the central bank tries to push rates down too far, people will just hold cash. Some economists, like the University of Colorado-Boulder’s Miles Kimball, have suggested taxing paper cash in order to allow rates to go very far into negative territory, but this has proven to be a non-starter politically.

The ZLB doesn’t just stop rates from going negative. It also affects people’s expectations for the future. Everyone knows that if another deflationary recession comes along, the ZLB will prevent the central bank from cutting rates in order to fight it.

Monetarists had hoped that if the central bank promised to keep rates low for a very long time, and to engage in lots of quantitative easing, that would counteract these negative expectations. But even if that’s true in theory — and let’s be honest, no one has a good theory of central bank communication — it turned out not to be true in practice.

Even if the legislature implements a rule that constrains the bank’s actions, that rule can be amended at any time. The bank might change its mind about the effect of monetary policy, or the desirability of hitting 2 percent inflation. It might get scared of political fallout. Or the people in charge of the central bank might simply be replaced with new, more hawkish leaders.

Since the central bank can’t make believable long-term promises, the effects of forward guidance and bold rhetoric are limited in reality, even if they could work in an ideal world. As for quantitative easing, it has run into its own practical hurdles. The BOJ bought so much stock that by the end of 2017, Bloomberg estimates that the central bank will be the biggest shareholder in 55 of the 225 companies in the Nikkei index. The BOJ now owns more that half of the ETF shares in the whole country.

That’s unsustainable. Eventually, it starts to affect corporate governance in ways that are well outside the scope of any macroeconomic model. And since companies and consumers knew that the buying binge was temporary, that probably limited its effectiveness.

So we’re seeing that even if inflationary monetary policy works fine in theory — which is very far from certain — reality just doesn’t work the way the models assume. Academic macroeconomists have largely ignored the real institutions and political constraints that govern how monetary policy works in the real world.

If Japan is out of the monetary easing game, other countries will doubtless follow. The era of bold monetary policy experimentation that began with the global financial crisis is now drawing to a close. More and more, economic policy makers will look to fiscal initiatives and to deeper structural reforms to boost growth and stop deflation.

*The author is a Bloomberg View columnist. He was an assistant professor of finance at Stony Brook University, and he blogs at Noahpinion.