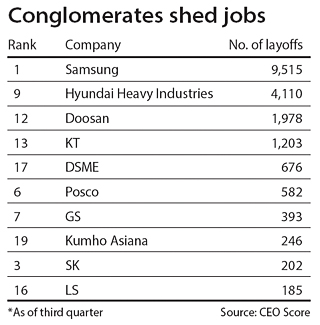 So far this year, the leading 30 conglomerates have laid off a net 14,000 employees. The situation could worsen as job opportunities shrink amid news that conglomerates were involved in the Choi Soon-sil scandal.

According to CEO Score, a private business website that monitors activities of local conglomerates, 19,512 employees at the top 30 companies have been laid off this year while 5,200 were hired.

As a result, the total number of workers has shrunk 1.4 percent compared to the end of last year to 988,345.

Some companies have laid off as many as 9,000 while others cut just six.

Samsung Group, the country’s biggest conglomerate, has laid off the most people. Its total number of employees at 22 affiliates, including flagship Samsung Electronics, shrank from more than 222,000 to 212,000.

The conglomerate has been accepting voluntary retirements at its five major affiliates - Samsung SDI, Samsung Electro-Mechanics, Samsung Engineering, Samsung Heavy Industries and Samsung C&T - as it is undergoing restructuring and reorganizing its businesses.

Major shipbuilders and shipping companies that are undergoing restructuring also laid off workers.

Hyundai Heavy Industries ranked after Samsung Group in number of employees that were let go. The company shed 4,100 of its employees, shrinking from 37,807 at the end of last year to 33,697 at the end of September.

Daewoo Shipbuilding and Marine Engineering, which is in a standoff with the government over restructuring, has seen the total number of employees shrink 5 percent or 676 employees to 12,523. Hanjin Group, whose shipping affiliate is under court receivership, saw its ranks shrink a half-percent or 120 to 25,267.

When counting the 1,795 employees that were laid off at Samsung’s shipbuilding affiliate, the number of people that lost their jobs at the three major shipbuilders is more than 6,100. The shipbuilding, shipping as well as the machinery and plant equipment industry has lost the largest number of people - more than 8,900 or 8.8 percent - through massive layoffs.

LG has seen the largest hiring among the top 30 conglomerates as the number of employees has grown 0.7 percent to 125,000. The company’s hiring is followed closely by CJ Group, which added 778 to end at 19,865 employees. Even Hyundai Motor Group, which has been involved in a labor strike since the summer, added 600 to end at 154,000.

The nation’s unemployment rate since hitting 12.5 percent in February has been within the 9 and 10 percent range, similar to the late 1990s when the country was suffering from its first financial crisis.

“Although the economic impact was much greater during the IMF crisis but it only lasted for roughly a year and a half,” said a Hyundai Research Institute analyst. “But the current stagnation has been continuing for more than five years. And although the impact is weaker [than the IMF crisis] the sentiment that people feel is much worse.”