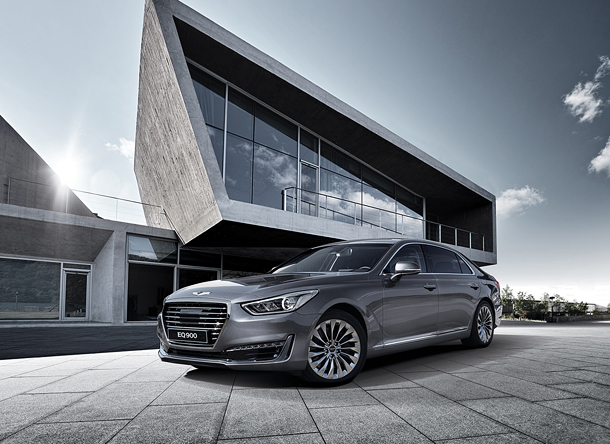 Hyundai Motor’s luxury Genesis G90 sedan has been nominated as the 2017 North American Car of the Year. [HYUNDAI MOTOR]

Hyundai Motor’s luxury Genesis G90 sedan has been nominated as a finalist for a car of the year award in North America, the automaker said Wednesday.

The sedan, also called the EQ900 in the Korean market, will compete against Chevrolet’s Bolt electric vehicle and another luxury sedan, the Volvo S90, for the title of 2017 North American Car of the Year.

Initiated in 1994, it is the longest-running award not associated with a specific publication. The contest is judged by 57 automotive journalists from the United States and Canada, according to the automaker.

The winner will be announced in January at the North American International Auto Show in Detroit.

It is the fifth time a Hyundai car was named a finalist. The Genesis BH sedan was the first Korean car to win the award, in 2009. It was followed by the Hyundai Elantra sedan, also known as the Avante in Korea, in 2012.

“When Genesis was awarded Car of the Year in 2009, it contributed to promoting the commercial values of the car and helped it enter the luxury cars market,” a Hyundai spokesperson said. “We are counting a lot on the final result to be released next year.”

After launching the G90 in the North American market in August, the carmaker has been stepping up its marketing efforts to increase the car’s presence in the premium car segment. In February, Hyundai won daily newspaper USA Today’s annual poll for favorite Super Bowl commercials.

The nomination itself has significant promotional value and adds to sales, the automaker said in a statement.

The award also runs in two other categories, for trucks and utility vehicles.

The Ford F-Series Super Duty, Honda Ridgeline and Nissan Titan were announced as finalists for North American Truck of the Year, while the Chrysler Pacifica, Jaguar F-Pace and Mazda CX-9 were nominated for Utility Vehicle of the Year.

In Korea, the car was selected the 2016 car of the year in March by the Korea Automobile Journalists Association largely due to its high-end features like Highway Driving Assist.