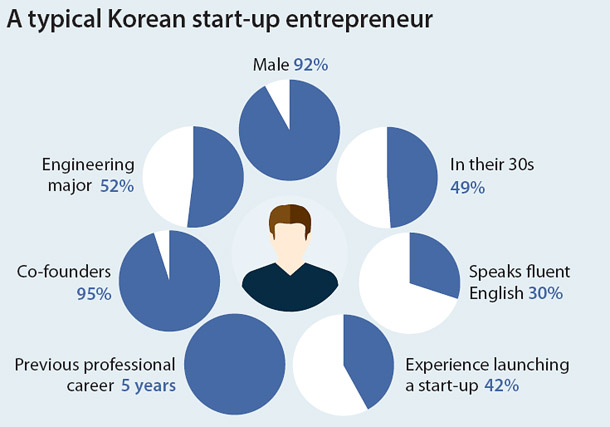 Korea’s start-up scene lacks diversity in gender and nationality compared to the world’s leading regions for start-ups and innovation, according to a study on Korean start-ups.

Women are just 9 percent of start-up founders in Korea, versus 24 percent in Silicon Valley, 20 percent in Tel Aviv and 19 percent in Singapore, according to a white paper released Wednesday by the Korean Startup Ecosystem Forum, a private think tank.

“Despite low entrepreneurship among women, overall participation of women in Korean start-ups is at a globally competitive level,” said Lee Ji-eun, professor of business information at Hanyang Cyber University and one of the co-authors of the study, at a news conference Wednesday at Google Campus Seoul.

The white paper is based on surveys and interviews with 295 start-ups in Seoul and Gyeonggi. The results were compared with four other technologically advanced regions, or start-up hubs.

Foreign participation in the Korean start-up ecosystem is much lower than in the other locations. Whereas London start-ups fill as much as 53 percent of their workforce with non-British nationals, and the percentage in Singapore stands at 52 percent, just 17 percent of Korea’s workforce is foreign.

Korean regulations that place a 20 percent cap on the number of international employees in any company and a complicated and difficult visa system limits international diversity, the study says. These factors have been previously noted by countless entrepreneurs and experts who have pointed out that President Park Geun-hye’s administration has set “creative economy” as a key policy imitative but hasn’t eased regulations for foreigners.

“Korea’s start-up ecosystem has grown rapidly in the past four years,” said Hwang Byung-sun, managing director of Big Bang Angels and co-editor of the study. “China and Southeast Asia have been posting growth but Korea doesn’t fall behind. But the excellence of our ecosystem isn’t that much publicized internationally, which led us to publish this white paper.”

The study shows that the average start-up entrepreneur in Korea is a man in his 30s who has an engineering degree, is fluent in English and had at least five years’ work experience.

The cost of launching a start-up in Korea is $27,000 and the number of starting members is 2.78 on average. It takes about four years for a start-up to receive a Series A investment, or the first round of venture capital financing.

By region within Seoul and Gyeonggi, Gangnam in southern Seoul, accommodated the largest portion of start-ups at 39 percent, followed by Seongnam in Gyeonggi at 22 percent.

“Gangnam is where the investment and networking are,” said Back Sang-hoon, professor of digital media at Kyungsung University and one of the study’s co-authors. “Over 3,000 start-up related events take place a year and 81 percent of all venture capital firms are located in Gangnam.”