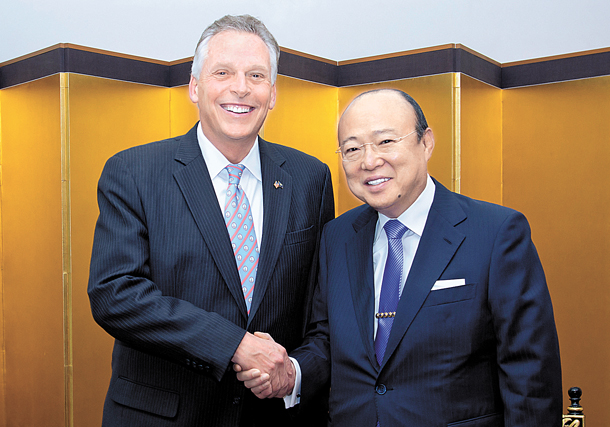 The Korean conglomerate, which specializes in chemicals, manufacturing and construction, has invested an accumulated $45 million in its Virginia-based subsidiary after acquiring it in 2007. It has been granted roughly $430,000 in incentives from the Virginia state government in the past three years and continues to invest in the region.

“We appreciate investment from Hanwha and we hope to maintain good support [for the company] going forward,” McAuliffe was quoted as saying by Hanwha.

The two men discussed the possible influence a new Trump administration might have on the free trade agreement between the United States and Korea, especially given the president-elect’s past calls for more protectionism.

Governor McAuliffe is one of Hillary Clinton’s closest friends and has been supporting the Clintons since 1996, when Bill Clinton ran for reelection as president. In his latest remarks after the most recent election, he said, “This was a difficult election, but the much harder work of building the country and economy our families deserve remains. The sooner we unite and move forward together, the more we can achieve for the Americans who entrusted us to lead.”