A composer’s journey for new sounds and stories : Yang Bang-ean says his 20-year career is only the beginning

A composer’s journey for new sounds and stories : Yang Bang-ean says his 20-year career is only the beginning 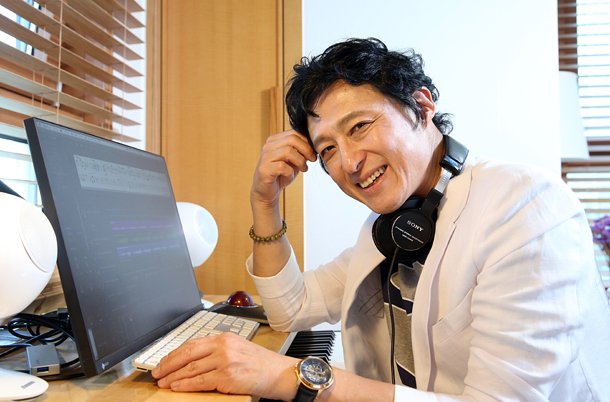 His father worked as a dentist and surgeon, his brother was also a surgeon, two of his sisters were pharmacists, and another was an anesthesiologist. He himself used to be a doctor, until he thought to himself after a year of work, “This isn’t where I should be.”

It was hard for world-renowned composer Yang Bang-ean, 56, to imagine himself as a musician until he reached his adulthood. He now stands as a famous figure, but his path was unclear when he started out as a rookie musician with only 500,000 won ($426) in his hands.

Marking 20 years since his debut as a solo artist, Yang recently introduced his anniversary album “The Best,” including his most famed and loved songs, and held a celebratory concert under the name “Utopia.” To delve into the artist’s past, the JoongAng Sunday, an affiliate of the Korea JoongAng Daily, sat with Yang and listened to his story. 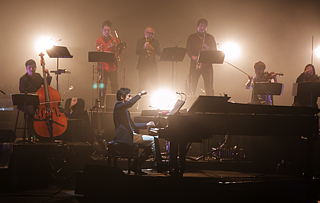 Yang Bang-ean held a concert earlier this month to celebrate the 20th anniversary since his debut as a solo artist. [ENDORF MUSIC]

Q. Your first album is called “The Gate of Dreams” and your most recent concert is named “Utopia.” Is there a special meaning to the names?

A. “The Gate of Dreams” means that I was at last able to open the door to my dreams, which was not easily opened until then. But this didn’t mean completion, and the same goes with “Utopia.” It doesn’t mean that I have reached my goals. It only signifies that I’m standing at a starting point for wider possibilities.

When many people hear your name, the first song they think of is “Frontier” from your fourth album. Why do you think the song is so popular?

I didn’t write it for that purpose, but “Frontier” was designated as the official theme song for the Busan Asian Games in 2002, through which many people got to hear the song. It’s included in the 20th anniversary album as well, along with “Neo Frontier,” which is rearranged into a jazz-like style.

Some point out that there haven’t been many notable new songs after the release of “Frontier.” What do you think about that?

For sure, I have come to touch on a wider range of music. I’ve worked as the artistic director of many big events like Yeowoorak Festival [music festival on fusion music comprised of traditional Korean music and contemporary music], for which I served for three years since 2012. This year, I started working as the artistic director of the Jeju Music Festival. I’m also serving as the music director for the opening and closing ceremonies of the 2018 Pyeongchang Winter Olympic Games.

Do you think that working for those big events has made you step away from the public?

Deadlines exist when I’m writing music for big events, which is not the case when I write music for my own album, but I wouldn’t say that the events took me away from listeners. I went on numerous tours to be able to meet with listeners as much as possible, not to mention that I came up with the new album “Embrace,” my seventh, last year. I also created music for the KBS documentary program “Asian Corridor in Heaven,” which was aired in 2007. Those were all fresh and meaningful works for me.

You are in your mid-50s right now. Do you think it’ll be possible for you to try coming up with new music at your age?

I believe that I must try to do so. In fact, in order to do that, I’m meeting many people and even going to rock festivals to gain new inspiration. In fact, it’s already been nine years since I started going to the Fuji Rock Festival every year. Around 120,000 people gather each year, and we all go wild. I personally think it’s very important to get motivated and be impressed with things when it comes to writing music. Jeju Island is one of the other places I often head to in order to gain inspiration for music.

What was it like working for the Yeowoorak festival when you’re not a creator of Korean traditional music?

I accepted the offer after they promised me that they would support me even if I try to make challenges that go beyond imagination. For the three years I worked for the festival, I formed various stages where young musicians met with famed artists dealing with all sorts of genres.

How much possibility do you see in traditional Korean music?

I’ve seen some musicians of the genre get invited to play in western festivals, and the music itself is surely getting more and more diverse. I think fusion music, especially, is evolving. In the past, fusion was quite difficult. It was limited to playing western music through Korean instruments, but these days, young artists are making grand improvements, realizing a diverse range of music like rock and jazz through Korean instruments. Traditional Korean music has a bright future ahead.

What is it like in Japan with their traditional music?

In Japan, very few people play traditional Japanese music. They only do western music. Also, there’s no traditional music-themed festivals in Japan, like Korea has with the Yeowoorak Festival.

How is writing music for the PyeongChang Winter Olympic Games?

We’re in the process of discussing the general storyline of the music.

Compared to your active works in Japan, Hong Kong and Korea, it’s rather difficult to see you working in China. What achievements have you made in China?

Two years ago, I made music for the water show in a park in Henan, China. It was enormous in size.

Why haven’t you performed in China?

I haven’t been invited to play there.

Perhaps you’ve made some anti-communist actions?

No, I wouldn’t say that. I almost got to play there once, but it didn’t happen. In China, I’m known mostly as a composer for animation or game music. I made the background music in the Japanese animated series “The Twelve Kingdoms,” which is a fictional story based off Chinese legend. I heard that quite a lot of Chinese people watched it. I’m also recognized by some Chinese people for my efforts in writing game music for NCsoft [an online game company], and I have received some offers to make music for other game companies as well.

Has your special family background had any influence on your life?

I have always thought that I live in a very special environment. I sometimes think to myself, “Why am I here?” or “Why do I live in Japan?” When I was young, I often got in trouble with teachers for liking rock music. I attended a Jochongnyeon [an association of pro-North Korean residents in Japan] school, so teachers were not fond of students listening to western music, especially rock music. Some people even called me a reactionary. Being called names like that was in fact a part of my daily life.

Do you think those kinds of memories have an effect on your music?

I wouldn’t say no. In the end, music derives from one’s backgrounds and environments, and also the feelings one receives from such circumstances.

Korea and Japan are in an uncomfortable diplomatic situation. Do you have any difficulties living as a Korean in Japan?

It would be a lie to say no to that, but I intentionally try not to think about those things.

Have you ever tried to put the “comfort women” issue or other historical matters into your music?

I’m not thinking of doing that because it could lead to other problems like misunderstandings. Instead, there are numerous shows where Korean musicians and Japanese musicians share the stage and happily play music together, which is really nice in itself.

Korea is a divided nation. As a composer that makes music through harmony, do you have any ideas for writing music on that subject?

As I’ve already mentioned, I am not planning on putting personal views into music. It’s up to listeners to think about certain things when they listen to music. For instance, in my fourth album “Pan-O-Rama,” there’s this song called “Dream Railroad.” When I listen to that song, I come to think of Gyeongui Line Railroad, and imaginatively link my mother’s hometown Sinuiju to Jeju Island, where my father is from.