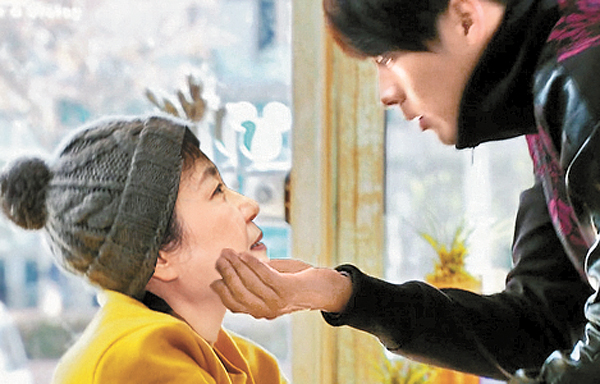 A parody of a famous scene in the 2010 hit TV drama series “Secret Garden.”

President Park Geun-hye received 150 million won ($127,920) worth of health and beauty care services from a high-end clinic in southern Seoul’s Gangnam District allegedly for free and under the name of Choi Soon-sil, the confidante whose pulling of strings at the Blue House has imperiled Park’s presidency.

According to an exclusive report by JTBC on Tuesday, Park was also registered at Chaum, an anti-aging center in Gangnam’s affluent Cheongdam-dong, under the code name Gil Ra-im, a character portrayed by actress Ha Ji-won in the 2010 hit TV drama series “Secret Garden.”

“Park would come here to exercise and receive health and beauty treatments, but she apparently asked people to not register her under her real name,” a former employee of Chaum told JTBC, an affiliate of the Korea JoongAng Daily. “So she was registered as Gil Ra-im.”

According to medical records obtained by the Ministry of Health and Welfare, Park received treatments at Chaum from 2011 to 2014.

Park reportedly did not pay for the treatments. The center’s VIP membership costs 150 million won.

“Park would receive an average of 300,000 to 400,000 won worth of treatments per visit, but she paid for none of them,” said another former employee of Chaum. “What’s more, Park would be treated to meals at restaurants afterwards by the head of the center.”

“Park always came with her aide Ahn Bong-geun,” she added. “And more than half the time, Choi would come with Park, too.”

Ahn, a former presidential secretary for public relations, was summoned by prosecutors on Monday for questioning in the ever-snowballing scandal dubbed Choi-gate. He is accused of allowing Choi to enter the Blue House without security clearance.

The scandal is another humiliating twist for the president. Her friend Choi is accused of meddling in state affairs, embezzling the funds of two nonprofit foundations and acquiring classified presidential information without security clearance.

Park is suspected of strong-arming Korea’s largest companies to provide graft at the illegal request of Choi. Heads of conglomerates have been summoned by prosecutors for questioning over that allegation in the past week.

The Health Ministry investigated a former senior doctor at Chaum surnamed Kim, and examined Park’s medical records. It was revealed on Tuesday that Park received treatment at Chaum 29 times from 2011 to 2014.

Kim said he brought the vitamins personally to the Blue House and injected Park.

Such injections are done from an IV bag filled with concentrated doses of vitamins.

Additionally, when a nurse at the Blue House brought a blood sample of Park’s to Chaum in September 2013 for examination, it was registered and recorded under Choi Soon-sil’s name.

Park may have received more medical treatments than recorded. From August 2010 to June this year, Choi Soon-sil is recorded to have visited Chaum 507 times and received 293 vitamin injections. In the same time period, her sister Choi Soon-deuk is recorded to have visited 158 times and received 109 vitamin injections. It’s unclear how many of them were actually treatments for the Choi sisters.

Choi also was prescribed vitamin injections 21 times in 2012 and 2013, and she told clinic staff that she would “take them to a hospital nearby to receive the injections.” It is unclear whether the injections were actually for Choi.

The Medical Service Act forbids doctors to register patients under false names or issue prescriptions without examining the patients.

Violations can be punished by up to three years of imprisonment and up to 10 million won in fines, in addition to a one month suspension of qualification as a medical service provider.

Medical records of the Choi sisters showed, however, that they were never prescribed propofol, contradicting an allegation that it may have been prescribed to Park via the sisters.

Propofol is an anesthetic and amnesiac drug implicated in the death of singer Michael Jackson in 2009.

Netizens pounced on the news, particularly the president’s choice of the pseudonym Gil Ra-im from a syrupy Korean television drama. It’s akin to an American celebrity using the pseudonym Lucy Ricardo or Scarlett O’Hara.

“Did I become Gil Ra-im for this?” reads a parodied screenshot of “Secret Garden” featuring an emotional scene with actress Ha Ji-won.

The statement echoed a line in Park’s second apology to the public on Nov. 4 over the national scandal, when she said, “I feel painful with a sense of shame, wondering to myself if I became the president for this.”

“Let’s all show up at the anti-Park rally this Saturday wearing Hyun Bin’s signature sweatsuit from the drama,” a user posted on Twitter.
Gil Ra-im was the No. 1 phrase being searched Wednesday afternoon on Naver, the country’s top portal site.