‘Park was behind rush to conclude GSOMIA,’ says official

‘Park was behind rush to conclude GSOMIA,’ says official 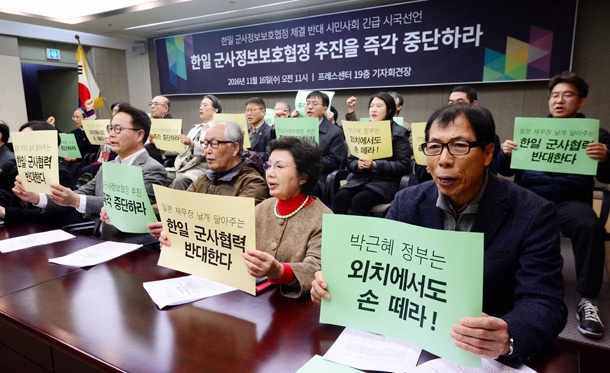 Activists hold up placards opposing a military intelligence-sharing pact with Japan in a press conference at the Press Center in central Seoul as civic organizations issued a statement calling for the government’s negotiations on the bilateral GSOMIA to be halted. [NEWSIS]

The Korean government’s rush to conclude a bilateral military intelligence-sharing pact with Japan was based on President Park Geun-hye’s orders, a high-ranking opposition official recently said, and could reflect a desire to take advantage of the domestic political crisis.

“The Defense Ministry’s position was to make sure the conditions were right,” a ranking official of an opposition party told the JoongAng Ilbo on Wednesday, “but it sped along negotiations in accordance with President Park’s wishes.”

Korea announced that, after four years, it plans to resume negotiations for a bilateral General Security of Military Information Agreement (GSOMIA) with Japan on Oct. 27.

Rather than seeking opposition parties’ views or public approval, the government entered negotiations with Tokyo right away. The Defense Ministry said because the two sides were close to signing the deal in 2012, there was little to discuss. Just 18 days later, the Korean Ministry of National Defense preliminarily signed the GSOMIA in Tokyo on Monday, after ending their third meeting on the issue.

Defense Minister Han has in recent parliamentary meetings defended the decision, calling it “a necessary measure in a situation where North Korea’s nuclear and missile threats are becoming a reality,” especially as Pyongyang conducted two nuclear tests this year and fired over 20 ballistic missiles.

But when Japanese Defense Minister Gen Nakatani called for a GSOMIA back in June on the sidelines of the Asia Security Summit, or Shangri-La Dialogue, in Singapore, Han replied that “conditions need to mature.”

The source added, “The Defense Ministry and the Blue House Office of National Security reported the progress of the GSOMIA negotiations to President Park, and she was to have ordered, ‘Carry on as planned.’”

He did not reveal when Park issued such orders.

“Only 15 percent of the people approve of this agreement, and the three opposition parties all requested to halt negotiations over the agreement,” the official pointed out. “The Defense Ministry has said that the conditions need to mature but is suddenly negotiating the GSOMIA, and this is a reflection of President Park Geun-hye’s wishes.”

During a press conference on Monday, Han said the intel-sharing pact was “already decided upon in the National Security Council” on Oct. 27, and that “this was not reported to the president,” implying the president was not involved in the decision.

Amid the influence-peddling scandal involving the president’s close friend, Choi Soon-sil, the opposition has demanded that Park resign.

Rep. Kim Jong-dae, a lawmaker of the Justice Party and a member of the parliamentary National Defense Committee, likewise questioned whether Park is “trying to use the security issue as a front.”

In 2012, the deal fell apart due to a domestic outcry over the secretive nature of the negotiations, widespread anti-Japanese sentiment and concerns that it would estrange China.

Despite Korea’s concerns about directly sharing information with Japan, Seoul and Tokyo have been in a trilateral information-sharing arrangement with Washington since December 2014.