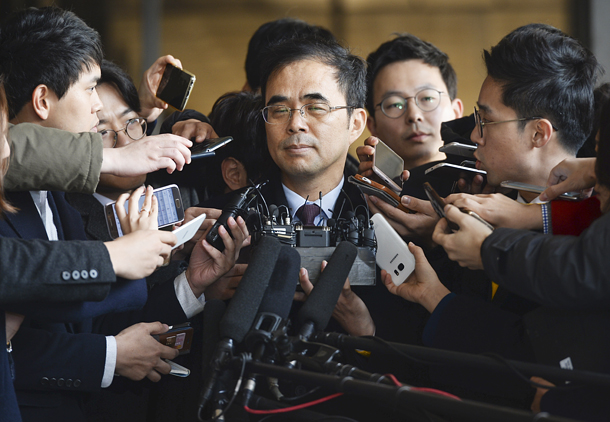 Reporters toss a barrage of questions at Kim Chong, former vice culture minister, who presents himself on Wednesday to the Seoul Central District Prosecutors’ Office to face an investigation into the Choi Soon-sil scandal. [NEWSIS]

Prosecutors said Wednesday they should question President Park Geun-hye by Friday at the latest, after Park’s lawyer demanded more time the day before to prepare for what will be the first-ever questioning of a sitting president.

“Considering what the lawyer (for Park) said yesterday,” a prosecutor involved in the case told reporters Wednesday, speaking on the condition of anonymity, “it appears unlikely we will proceed with the questioning Thursday.”

Prosecutors’ said they could still question Park on Friday, a reversal of their initial position that she be questioned on Wednesday in consideration of the pace of their investigation and the indictment deadline for Choi Soon-sil, whose detention warrant expires on Sunday. They are hoping to use Park’s testimony in their indictment of Choi.

While struggling to compromise with Park’s lawyer, prosecutors reiterated on Wednesday the necessity of a face-to-face with Park to discuss alleged influence-peddling and meddling in state affairs by Choi, the president’s longtime friend, who has made the Park government the subject of public ridicule and scorn.

Park’s lawyer, Yoo Yeong-ha, demanded prosecutors delay the questioning without setting a specific timetable, though he said it would require him at least a week to prepare. Yoo, a former prosecutor who, beginning in 2004, ran for lawmaker on the back of Park’s endorsement and failed three times in a row, also said the prosecutors’ questioning should come at the last phase of the investigation into the so-called Choi-gate.

While prosecutors are adamant that a face-to-face probe is essential to find out the extent of Park’s involvement in Choi’s alleged illegal political influence, they have no means by which to force Park to submit since prosecutors see her as a witness in the case rather than a suspect.

Prosecutors said Wednesday if President Park refuses to be questioned Friday, they will try to question her after this weekend, when they plan to indict Choi Soon-sil, Jeong Ho-seong, former personal secretary for Park for 18 years, and An Chong-bum, former senior presidential secretary for policy coordination.

Because Korean presidents enjoy immunity from criminal prosecution, Park cannot be charged while in office except in cases of insurrection or treason. But the president can be questioned either as a witness or suspect in a criminal investigation. Prosecutors said they were planning to question Park as a witness, but would inform her of her right to remain silent. That is an indication that while she is not the subject of a criminal probe now, in which case she would be questioned as a suspect, she could be in the future.

Should Park be notified of her Miranda rights before questioning, her responses can be used in future criminal proceedings.

Legal and political analysts expect prosecutors to grill Park on an array of allegations, ranging from Choi’s influence-peddling and acquiring of classified information without security clearance to strong-arming 77.4 billion won ($66.3 million) in contributions from 53 conglomerates, which was placed in two nonprofit foundations that were essentially run by Choi.

Regarding the leaks of classified material, Park is expected to be asked how drafts of presidential speeches ended up on Choi’s tablet PC, and whether other classified information concerning foreign relations, national security and personnel management was also leaked to her.

Yoo’s refusal to send his client in for a questioning seems to reflect Park’s plan to buy time to appease the public before she is probed. Political observers say that since ruling and opposition parties agreed to form a special investigation counsel, which is expected to be launched in the coming days, Park plans to only attend the questioning by the counsel.

Prosecutors reportedly obtained evidence from An Chong-bum, who is under detention, that proved President Park’s direct role in pressuring 53 conglomerates to make contributions to the Mi-R and K-Sports foundations. Munhwa Ilbo, a local daily newspaper, reported Wednesday that prosecutors seized An’s handwritten note, which claims Park ordered conglomerates to donate the 77.4 billion won. If true, the evidence would support a case for third-party bribery against Park.

Prosecutors are also looking into the nature of Park’s one on one meeting with the heads of seven conglomerates in July 2015. It is reported that prior to the previously undisclosed July meetings last year, the presidential office demanded the seven companies inform it of urgent business issues facing each company.

According to the JoongAng Ilbo on Wednesday, An wrote in his note that SK and CJ groups’ biggest concern at the time was their inability to produce long-term plans because their group owners, Chey Tae-won and Lee Jay-hyun, were then serving prison terms for business malpractice. Chey was released on a presidential pardon on Aug. 15 of last year. Lee was released on the same day this year, also on presidential pardon.

Meanwhile, Samsung’s main concern, according to the disgraced former economics professor’s note, was the objection by the U.S. hedge fund, Elliot Associates, to a planned merger between Samsung C&T and Cheil Industries, which was meant to consolidate Samsung Electronics vice chairman Lee Jae-yong’s control over the entire Samsung Group. The National Pension Service ultimately sided with Samsung’s plan.

SK and CJ groups gave 11.1 billion won and 1.3 billion won each to the two foundations. Samsung Group, the country’s biggest conglomerate, gave the most - 20.4 billion won.

Prosecutors also questioned Kim Chong, former vice culture minister, on Wednesday as a suspect over allegations that he gave business favors to Choi and helped her daughter, Chung Yoo-ra, become a national dressage athlete. Kim resigned from his post last month in the face of burgeoning suspicions over his foul play.