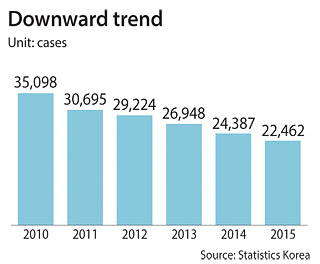 The number of intercultural marriages in Korea continues to drop, although all marriages also declined.

“The Korean government strengthened its regulations on marriage brokers in 2010 after a large number of crimes occurred,” said Lee Jee-yeon, a director at Statistics Korea. “There were many cases including one in which a Korean man killed his Cambodian wife to get the insurance money.”

Intercultural marriages accounted for 7.4 percent of all marriages last year, continuing a fall from 2008’s 11.2 percent.

By region, North Jeolla had the highest proportion of intercultural marriages at 8.4 percent, followed by the southern island of Jeju at 8.2 percent and South Jeolla at 8.1 percent.

“There were more men in rural areas who looked for partners overseas since there are relatively fewer young women in those regions,” Lee said.

Korean men over the age of 45 marrying foreigners accounted for 22.7 percent of all intercultural marriages, but the statistics agency said that figure is declining, while it is rising for men in their late 20s and early 30s.

Of non-Korean men who entered into intercultural marriages last year, Chinese men accounted for 9.7 percent, followed by American men at 7.3 percent and Japanese at 3.6 percent. “The number of men from Vietnam, China and the United States rose compared to the previous year, while it dropped for Japanese,” Lee at the statistics agency said.

The number of intercultural divorces and babies born in such marriages also dropped.

The divorce rate was higher for Korean men and foreign women at 48.8 percent of the total. The figure for foreign men divorcing Korean women was 17.8 percent.

“Fewer intercultural couples are divorcing compared to the past and they are living longer together,” said Lee. The average duration of an intercultural marriage that failed was 6.9 years last year, which was slightly higher than the 6.4 years recorded in 2014.