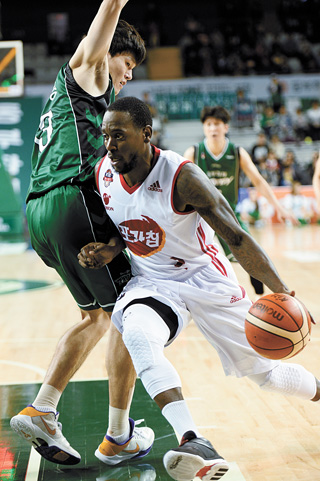 Defending champions the Goyang Orion Orions host visitors from the capital as the Seoul SK Knights are slated to play in Goyang on Saturday.

In the 2016-17 KBL season so far, the Orions look as though they have what it takes to repeat the feat and take home the championship rings for the second straight year. At the moment, the Orions are ranked first in the league with seven wins and two losses, by far the most dominant force.

Their latest game was on Tuesday against Wonju Dongbu Promy, which is ranked third with six wins and three losses, during which the Orions suffered a one-point loss after going all the way into overtime.

In the neck-and-neck match against the Promy, O’Darien Bassett led the Orions by putting up a game-high 33 points on the board.

But the American’s effort went for naught. While the Promy’s imports Rod Benson and Wendell Mckines tallied 23 and 22 points each, Kim scored 21 points, including four three pointers. The combined effort of the Promy players ended Orions’ four-game winning spree.

The Changwon LG Sakers travel up to Seoul to face the Seoul Samsung Thunders in Jamsil, Seoul.

The Sakers will have their hands full during the match.

During the game, the Thunders essentially outplayed the Sakers in many categories crucial in a basketball game. The Thunders first outrebounded the Sakers by seven, taking 42 balls off the rim for themselves while allowing the Sakers to take 35. Out of 42, 28 of the rebounds that the Thunders grabbed came in defensive position, which means they managed to cut short the Sakers’ offensive effort consistently.

The Sakers had a hard time stopping the Thunders import, Ricardo Ratliffe, a center from the United States who led the match in scoring with 29 points.

While the Sakers look to avenge their loss, the Thunders will do whatever they can to stay at the top of the standings this weekend. The good news for the Sakers is that this weekend is a particularly tiring one for the Thunders, since they have to travel all the way down to Ulsan, 300 kilometers (186 miles) from Seoul, the previous day to play against Ulsan Mobis Phoebus. 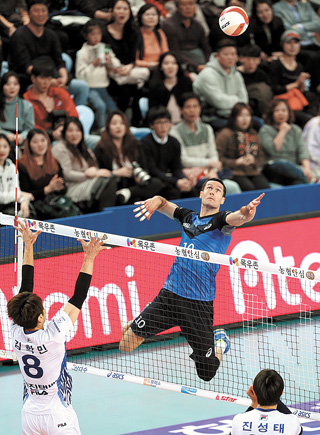 The Cheonan Hyundai Capital Skywalkers, who had a huge run last season with 18-game winning streak, were the winners of the regular season last year. With most of the key players from last year still onboard, including Moon Sung-min, the MVP award winner from last season, the Skywalkers’ head coach, Choi Tae-woong, had high hopes again this season, although his hope has been challenged from early in the season.

As of Wednesday, after their narrow win over Ansan OK Savings Bank on Tuesday, the Skywalkers are ranked fifth out of seven teams in the league.

With his foreign players not playing up to his expectations, Choi has no choice but to rely on domestic players such as Moon this weekend and onward.