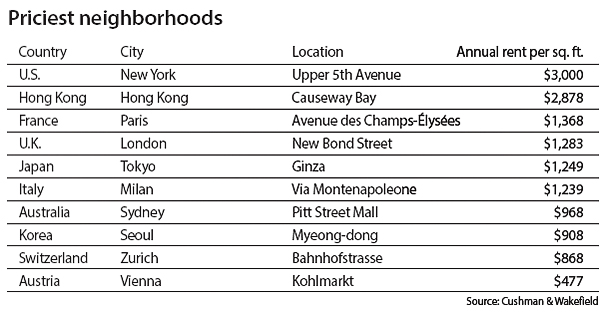 Myeong-dong, which has topped the domestic ranks for expensive real estate for 13 years, has moved up in the ranks of the global top ten neighborhoods for pricey rents.

According to Cushman & Wakefield’s annual “Main Streets Across the World,” on Thursday, Myeong-dong in central Seoul ranked as the eighth most expensive location in the world.

The commercial district that is especially popular with Japanese and Chinese tourists saw its rank rise one notch from last year. The report by the global real estate consulting firm analyzed 462 shopping streets in the world and how much they charge in rents.

When limiting the ranking to the Asia-Pacific, Myeong-dong came in fourth after Hong Kong, Sydney and Tokyo.

The annual rent in Myeong-dong was $907.6 per square foot per year, which is up 6.3 percent compared to the previous year. Other expensive properties in the country were Gangnam and Garosugil in southern Seoul. Gangnam saw annual rent at $699.6 and Garosugil at $351.4.

When converting to monthly rent per square meter Gangnam’s rose 7.3 percent compared to a year ago to 722,820 won while rents in Garosugil dipped 2.2 percent to 363,025 won.

The report noted that many of the expensive neighborhoods enjoy popularity with Chinese tourists. According to the Seoul government last year, 8.5 million Chinese visited Myeong-dong in 2015.

Studies showed that more than 80 percent of tourists to Seoul visit the shopping district.

As a result, the Nature Republic store in Myeong-dong remained the most expensive property in the country. Last year the 3.3 square-meter area was valued at 83 billion won ($70.65 million).

Cushman & Wakefield said global luxury brands are taking an interest in the Korean market, a trend that is likely to continue.

“Global brands are opening exclusive stores, underpinned by robust performances,” the report said citing Christopher Kane, which opened its first store in Asia in Shinsegae Department Store’s Gangnam branch in Banpo-dong in March, and Lardini, which opened at the same branch the following month.

“South Korea is also becoming an Asian test bed for luxury watches, with Roger Dubuis choosing South Korea as their entry point to the region,” the report said.

Non-fashion foreign brands have also been moving into the popular Gangnam region, including Shake Shack, which opened its first store in Korea in Gangnam earlier this year. The brand plans to increase the number of its outlets in Korea by 25 by 2025. The British pharmacy chain Boots is also planning to enter the Korea market through Shinsegae-owned E-Mart next year.

However, Cushman & Wakefield’s report said some foreign brands are exiting the Korean market, which they find to be a saturated market or weaker than before.

“For example, Forever 21 closed their Garosugil store and Canadian Joe Fresh, which opened in 2014, has exited,” the report said.

The most expensive district in the world was upper 5th Avenue in New York, where the average annual rent per square foot was $3,000. It was followed by Hong Kong’s Causeway Bay with $2,878 and Paris’ Avenue des Champs-Elysees with $1,368.