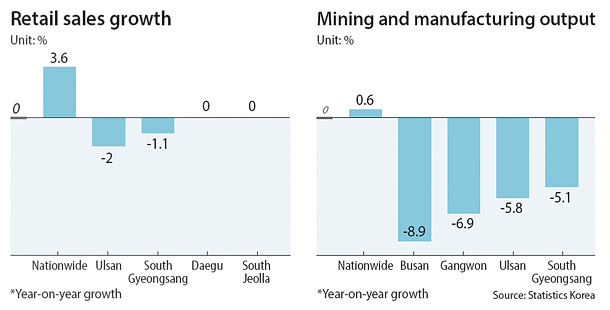 Ongoing restructuring in the nation’s shipbuilding and shipping companies continues to take its toll on the country’s southern regions, where the economy is heavily reliant on the two industries, according to government figures released Thursday.

Industrial output in the regions fell during the third quarter compared to the same period last year. Output in the southern port city of Ulsan dropped 5.8 percent, and in the province of South Gyeongsang, output fell 5.1 percent. Busan’s industrial output plummeted 8.9 percent.

“Ulsan’s economy is heavily dependent on the manufacturing sector, and it was hit hard by corporate restructuring and weak exports,” said Park Sang-young, a director at Statistics Korea. “South Gyeongsang and Busan were also affected by restructuring in the shipping and shipbuilding industries.”

“It appears that recent earthquakes on the southeastern coast of the country dragged down the number of foreign tourists visiting the regions and has also pulled down consumer sentiment among people living in those areas,” Park said.

While construction orders rose 3.6 percent overall in Korea, the figure plummeted 84.7 percent in Ulsan and 35 percent in Busan and Daegu.

And even though corporate restructuring has weakened the southern coastal regions’ economies, the southern island of Jeju continues to see economic improvement. During the third quarter, mining and industrial output in Jeju rose 17.8 percent, and retail sales went up 11.3 percent.

“Jeju’s industrial output rose significantly as there was more composite fertilizer, purified water and cement produced compared to the past,” said Park at the statistics agency. Jeju’s chemical-related products output jumped 502.6 percent and that of beverages rose 22.9 percent.

Services output was also highest in Jeju. Jeju’s services output rose 6.9 percent, while the nationwide growth was almost half that at 3.6 percent. Ulsan’s figure was a dismal 0.5 percent.

“Jeju’s services sector, especially that of financial and insurance, remains very strong,” Park said. He added that Jeju’s real estate market is heating up, with many taking out loans and contributing to the financial sector’s output.