‘My Annoying Brother’ is heartwarming, but predictable

‘My Annoying Brother’ is heartwarming, but predictable 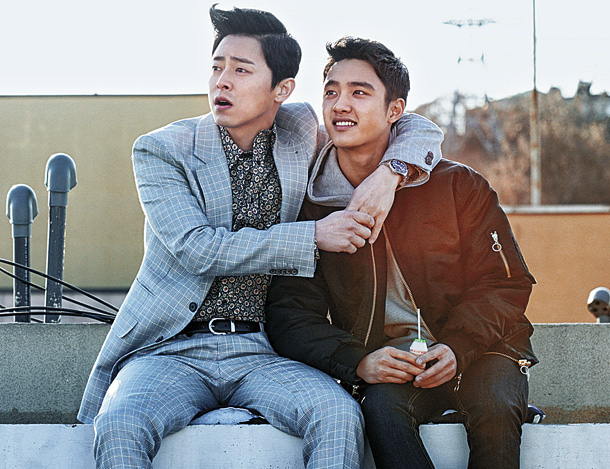 “My Annoying Brother” is a new family-comedy about the brotherhood of a fallen national judo player, played by Do Kyung-soo from male act Exo (right), and his stepbrother, played by Cho Jung-seok. [CJ E&M]

Family comedies are one of the most common and well-received genres in the Korean film market. The humorous and heart-warming stories that wet the audiences’ eyes with both laughter and emotions often lead them to check out the next family comedy in theaters even though they are perfectly aware that the new one probably won’t be much different from the ones they have seen previously. “Miracle in Cell No.7” (2013), which notched an impressive 12.8 million ticket sales, and “Speed Scandal” (2008), which sold a total 8.2 million admissions, prove that people will accept cliches when it comes to the family comedy genre.

The upcoming “My Annoying Brother” is yet another family comedy that is expected to pull the heartstrings of local viewers despite the less than original storyline. Helmed by director Kwon Soo-kyung (“Barefoot Gi Bong”), it is a star-studded film featuring actor Cho Jung-seok (“The Face Reader”), singer-turned-actor Do Kyung-soo (“Unforgettable”), better known as D.O. from the boy band Exo, and actress Park Shin-hye.

Penned by screenwriter Yoo Young-a, whose previous works include the “Miracle in Cell No.7,” the upcoming movie displays the relationship of a fallen national judo player Go Du-yeong (Do) and his older stepbrother Go Du-sik (Cho), who is imprisoned in jail for fraud. The story shows how the pair, who had a difficult past, gradually open up to each other.

The plot begins when Du-yeong goes blind after a match damages his optic nerves. Having lost their parents a long time ago, the accident allows his older brother to be released from prison on parole. Although the two at first show extreme hostility toward the other, they steadily form bonds and ultimately grow inseparable. Du-yeong’s decision to try out for the Paralympics under the guidance of coach Lee Su-hyeon (Park) extends the story.

Cho’s sly and comic acting that is derived from his overuse of swear words, sandpapery attitude and ludicrous behavior is very impressive, making it difficult for viewers to imagine anyone else suitable for the role.

“Cho is specialized in this kind of acting,” the filmmaker Kwon said during a press preview held on Tuesday in Seongdong District, eastern Seoul. “Although he acted based on the script, his agility greatly helped [in making the movie more entertaining.]”

Despite his special talent, however, this kind of acting from Cho is far from original, as he has played similar characters in a number of his previous works such as in drama “Oh My Ghost” (2015) and the latest “Jealousy Incarnate,” which just wrapped last week.

Although Cho’s acting keeps the film entertaining, it starts to get boring as it attempts to force tears out of the audience by suddenly hitting Du-sik with unfortunate health issues. Also, some scenes, such as the coach desperately begging her senior with tear-filled eyes to allow her to give up coaching an ordinary national judo players to help train Du-yeong for the Paralympics, seem unnecessarily emotional.

Despite having the A-list actress Park on the cast, the film doesn’t make full use of her ability, as Park has a limited role in the film. Do, on the other hand, is able to make his presence felt to viewers by pulling off being a blind sports star. Although his character isn’t as comical as Cho’s to serve the comedy genre, the character allows him to show a different aspect of himself as an actor.

In fact, during a press event held late last month to promote the movie, Do said that “I decided to join ‘My Annoying Brother’ because I believed the film would help me show a new aspect of my acting.”

Family comedies are popular due to their stability, according to film critic Oh Dong-jin, operation director for the Wildflower Film Awards Korea and the executive director for Marie Claire Film Festival. “[For movie studios], family comedies are a safe investment that is guaranteed to make a certain amount of profit because of its ability to embrace diverse age groups.”

Oh also stressed the importance of the actors’ role in contributing to a family comedy’s success.

“The biggest factor for a family-comedy movie’s success is not the quality, but the actors’ ability to attract a diverse audience. In terms of ‘My Annoying Brother,’ Cho is a guaranteed actor while Do is expected to attract teenaged viewers. In addition, Park is a popular actress among those in their 20s and 30s.”

It remains to be seen whether the upcoming star-studded movie will be able to inspire audiences despite its banal story.

“My Annoying Brother” runs 110 minutes and is slated to hit theaters on Nov. 24. The film is rated 12 and over.