Tough guy film star finds success being sweet : Known for aggressive roles, Ma Dong-seok is not afraid to be cute

Tough guy film star finds success being sweet : Known for aggressive roles, Ma Dong-seok is not afraid to be cute 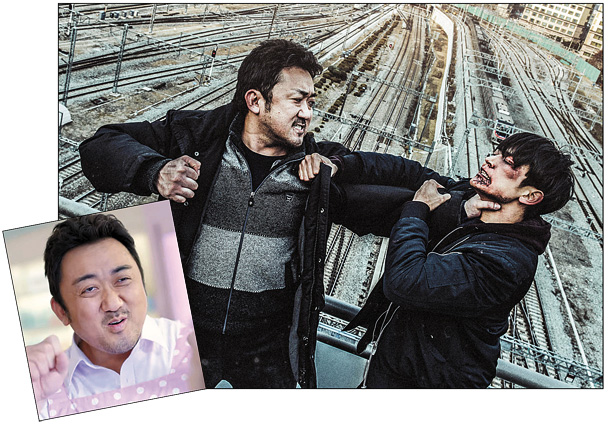 Ma Dong-seok can pull off a variety of characters. From left to right; Ma models for a cosmetic brand Etude, stars as the illegal karaoke bar owner in an upcoming crime thriller “Derailed” and plays a sophisticated stylist in “Familyhood,” which hit theaters in June. [SCREEN CAPTURE]

Korean-American actor Don Lee is returning to the big screen in the crime thriller “Derailed” after recently starring in the megahit “Train to Busan,” which was the first and only local film so far this year to exceed 10 million tickets sold.

Better known by his Korean name Ma Dong-seok, the actor plays an evil karaoke owner named Hyeong-seok, who entices runaway teenage girls to work for his karaoke bar, where women provide sexual services to male customers. His life becomes complicated, when he forces a runaway girl Ga-yeong (Daeun from girl group 2EYES), who lives with a group of other high school students that left home, to work at the bar. Her boyfriend Jin-il (Choi Min-ho from male act SHINee), tries everything he can to save Ga-yeong from working at the karaoke bar. When he reaches the limit, he kidnaps Hyeong-seok’s cherished middle-school daughter to gain his girlfriend back.

Directed by Lee Seong-tae and scheduled to be released on Nov. 30, this crime thriller makes full use of Ma’s muscles, as Ma is once again featured as a strong man, who can move almost anything out of his way with his physical strength. Having at one time been a personal trainer for mixed martial artists Mark Coleman and Kevin Randleman, the strong man role has become what people expect from Ma, and has helped the actor build his career.

At the same time, Ma’s macho look and muscular body have long limited the 45-year-old’s roles to characters that emphasize his masculinity. Since his debut in 2005 through “Heaven’s Soldiers,” Ma has mostly appeared in action or thriller films. “The Neighbors,” in which he played a foul-mouthed, tattooed, and abusive gangster and the crime-thriller “Deep Trap,” in which he starred as an aggressive pervert, are a few of the works that prove Ma is an irreplaceable actor when it comes to featuring masculine characters. 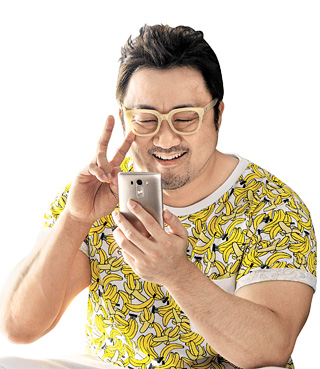 That image, however, has started to see some changes. Despite playing similar characters for almost a decade, Ma’s roles have started to see some changes in recent years. While maintaining his masculinity, the actor began to play protagonists with cute personalities, which were unexpected from him for those familiar with his characters in previous films. In the comedy “Familyhood,” released in June, Ma plays a top actress’s sophisticated stylist, who enjoys wearing high-fashion items such as a pink t-shirt and orange scarf that don’t seem to match his intimidating look. The protagonist is not reluctant to wear a girly polka-dotted apron and make cute poses while wearing a silly t-shirt covered in bananas. Similarly, in “Train to Busan,” released in July, Ma stars as the husband of a pregnant woman, who bravely fights off deadly zombies using his bare hands, but always remains adorable and charming to his temperamental wife.

To many people’s surprise, the actor gracefully pulled off these unexpected roles and earned himself the nickname “Mavely,” which is a portmanteau of Ma and lovely.

As if to further live up to his fans’ expectations, Ma began to star in advertisements that surely prove that he deserves the nickname. One of them is for the cosmetic brand Etude, which is well-known for its princess-like image. In the advertisement, which was unveiled in September, Ma is featured as the owner of a pink-filled Etude shop, and welcomes a customer while wearing Etude’s famous pink apron uniform. In the 2-minute ad, Ma does not hesitate in making girly responses such as excitedly jumping up and down while complimenting the customer.

Not every celebrity can garner such a warm response from the public by playing such contrasting roles. However, Ma’s unexpected charms have worked well because he proved through social media that his actual personality in fact resembles the cute aspects he has shown on screen recently, according to Hwang Jin-mi, a cultural critic for film-focused weekly magazine Cine21.

“Through his social media, we have seen his tidy house that is filled with cute items. Also, his effort to treat others very carefully in order not to be perceived as intimidating outside of shooting scenes have all contributed to making people believe that the actor’s actual personality is in fact different from his manly appearance, making it easier for the audiences to accept this new aspect of the actor.”