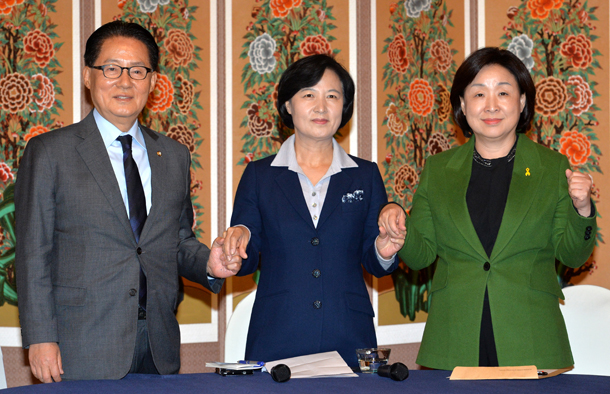 Leaders of three opposition parties have a meeting in the National Assembly on Thursday to coordinate their response to President Park Geun-hye’s efforts to salvage her presidency. From left: Park Jie-won, interim leader and floor leader of the People’s Party; Choo Mi-ae, chairwoman of the Minjoo Party of Korea and Sim Sang-jeong, chairwoman of the Justice Party. [PARK JONG-KEUN]

The National Assembly Thursday voted to appoint an independent counsel to investigate snowballing allegations that state affairs were manipulated by President Park Geun-hye’s friend Choi Soon-sil and their associates.

A bill to appoint an independent counsel was passed by an overwhelming majority.

The special prosecutor will investigate a vast array of allegations that Choi, who held no public office in the Park administration, manipulated state affairs with her associates.

A plan to hold a parliamentary investigation separate from the independent counsel probe was also approved Thursday.

The parallel investigations are the lawmakers’ latest attacks on the deeply wounded administration as Park resumed presidential activities this week in a signal that she is ignoring a rising public demand for her to resign.

Of the 300 members of the National Assembly, 220 participated in the vote for the independent counsel and 196 supported the bill. Ten lawmakers voted against it, while 14 abstained. All the lawmakers who voted against the plan were members of Park’s ruling Saenuri Party.

According to the plan, the opposition Minjoo Party and the People’s Party will each recommend a candidate for chief special prosecutor and Park will select one of them. Once the law takes effect, the recommendation and the selection of the independent counsel should be completed in 14 days.

In an attempt to salvage her sinking presidency, Park said on Nov. 4 that she will submit to a criminal investigation into allegations that she allowed Choi to influence state affairs. “If necessary, I will also faithfully submit to the prosecution’s investigation, and I will also accept an independent counsel investigation,” Park said during a press conference that included her second apology to the public about the scandal.

Park is expected to become the first president in the history of Korea to be investigated while in office. While prosecutors have been interrogating Choi and other Park associates who worked at the Blue House over the past week, their plan to question the president in person has yet to be realized. Park’s attorney asked for a delay.

The independent counsel bill was sponsored by 209 lawmakers from both ruling and opposition parties and submitted to the legislature on Tuesday. Of the 129 Saenuri lawmakers, 50 sponsored the bill.

The specifics of the probe were agreed on Monday among the Saenuri, Minjoo and People’s parties. The independent counsel will head the largest team to probe the scandal. Four assistant prosecutors will support the counsel, while 20 prosecutors and 40 special investigators will be dispatched from the prosecution. The independent counsel has up to 120 days to conduct its investigation.

The ruling and opposition parties also agreed to a wide scope for the investigation. All allegations stemming from the scandal, from leaks of classified information to Choi’s alleged strong-arming of conglomerates to make contributions to two nonprofit foundations, will be investigated.

The team will also investigate if dozens of conglomerates that contributed to the foundations expected business favors from the government in return. If that turns out to have been the case, it will back a bribery charge for Choi as well as for President Park if the two colluded.

The special prosecutor has 70 days to conclude the probe and file indictments. The probe can have a 30-day extension if the president allows it.

Although the plan was sponsored by the ruling and opposition parties and Park said publicly she is willing to submit to it, the passage was not easy.

It was first discussed at the Legislation and Judiciary Committee on Wednesday, but its chairman, Rep. Kweon Seong-dong of the Saenuri Party, did not allow a vote. “By allowing only opposition parties to recommend the special prosecutor candidate, the probe’s integrity will be questioned,” he said. “The candidates must be indisputably neutral.”

The bill was tabled again at the committee on Thursday, but the discussion broke down after 20 minutes.

“If this bill is passed today, it will be remembered as a disgraceful history of the committee, which gave up principle under the pressures of candlelight vigils,” Rep. Kim Jin-tae of the Saenuri Party, a loyalist of President Park, said. “But candles will all go out when winds blow. I want to tell you that public sentiment will always change.”

Opposition lawmakers sneered at Kim’s argument, asking the committee chairman to arrange the voting. Kweon ordered a recess, talked to the Saenuri members on the committee and announced that the bill was passed, sending it to the main voting session.

While the legislature stepped up its pressure on Park to resign by sanctioning the independent counsel probe, Park made clear that she will not exit gently. Although she had no public activity since her visit to the National Assembly on Nov. 8, Park made a series of appointments throughout this week. She appointed a vice foreign minister on Wednesday and a vice minister of culture, sports and tourism on Thursday.

She also ordered the justice minister on Wednesday to conduct a through investigation into a massive bribery scandal involving a Busan-based real estate developer, stressing that politicians from both ruling and opposition parties were accused of receiving money from him.

Rumors spread quickly that Moon Jae-in, former chairman of the Minjoo Party and the liberal presidential candidate defeated by Park in 2012 was bribed by the developer, Lee Young-bok, and that Park was trying to fight back against the opposition. Moon filed a petition to the prosecution on Thursday to investigate the people who are circulating those accusations.

Park will also resume diplomatic activity as president. At a briefing Thursday, a foreign ministry spokesman said she will attend the Korea-China-Japan summit scheduled for next month in Japan.

“The three countries are coordinating the schedule based on the understanding that the summit should take place before the end of this year,” he said. “When the schedule is fixed, the president will attend.”

According to the Japanese media, Tokyo proposed to Seoul and Beijing to hold the trilateral summit on Dec. 19 and 20.

“Because the opposition parties refused Park’s proposal that they choose a new prime minister, she decided that she should no longer be pushed around,” a source close to the administration told the JoongAng Ilbo.