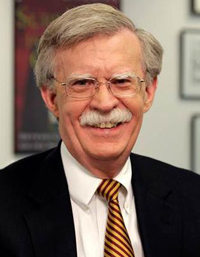 Former U.S. Ambassador to the UN John Bolton, who is being considered as a possible secretary of state in the Donald J. Trump administration, told a group of Korean lawmakers that there is a zero percent possibility that Washington would conduct a preemptive strike on Pyongyang.

Saenuri Rep. Na Kyung-won, who was a part of a five-person bipartisan delegation of lawmakers in Washington trying to meet with President-elect Trump’s transition team, said this was an indication that Bolton is aware of what kind of impact such an attack on North Korea would have.

Some hawks in Washington have suggested a preemptive strike on North Korea to counter its nuclear and missile programs.

Na told reporters that Bolton “is well aware of what kind of a price South Korea would pay in the case of a preemptive strike on North Korea.”

She quoted Bolton as saying that the North Korea nuclear and missile issue is “emerging as an issue of most concern within the United States.”

However, Na pointed out that Bolton said he did not have any intention of entering negotiations with North Korea, a contrast to Trump’s statement during the campaign that he is open to meeting with the leader of the regime, Kim Jong-un.

Bolton, a senior fellow at the conservative American Enterprise Institute, served as Washington’s top diplomat to the UN and under-secretary of state for arms control and international security affairs under the George W. Bush administration.

The group kicked off their mission to build ties with the incoming Trump administration in New York on Monday.

Amid reports of infighting and disorganization in Trump’s transition team, Bolton told the Fox Business Network Wednesday, “These decisions are particularly important and I honestly believe that Donald Trump should take as much time as he wants,” in putting together a strong cabinet.

He stressed that it is important that Trump “ends up with a team that can function together.”

The Korean lawmakers also met with Republican Rep. Ed Royce of California, chairman of the House Foreign Affairs Committee, who has maintained strong relations with Seoul and has been a voice for the Korean-American community and their concerns.

Edwin Feulner, a former president of the conservative think tank Heritage Foundation, who is an adviser to Trump’s transition team, told the lawmakers Tuesday that Washington should impose secondary boycotts on Chinese financial institutions for doing business with North Korea.

He went on to stress that the Republican Party remains strongly committed to the alliance between Korea and the United States.

The Heritage Foundation is reported as having a strong role in shaping the transition. In its recent 2016 Index of U.S. Military Strength, it said that Korea provides “substantial resources” to maintain the 28,500 American troops stationed here.

The report added that the Korean government provides some $900 million annually “in either direct funding or in-kind support, covering cost-sharing for labor, logistics, and improvements in facilities.”