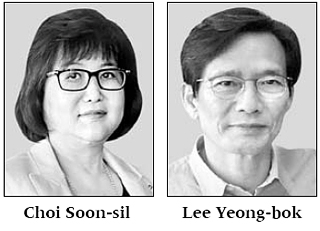 President Park Geun-hye’s confidante, Choi Soon-sil, was a member of an “association meeting” group that included Lee Young-bok, CEO of Cheongan Construction and head of an urban development project along the coastline of Busan’s Haeundae District who is accused of amassing 57 billion won ($48.8 million) in slush funds and lobbying public officials with them, according to a third member of the club who spoke exclusively with the JoongAng Ilbo.

The statement could mean that Choi and Lee are highly involved in each other’s scandals, which until recently have been developing separately. Lee denied this by saying he has “never even seen her face.”

Lee, 66, was apprehended last Saturday after being on the run for three months.

The source, who wished to be identified only by the surname Kim, backed Lee’s denial and claimed that the Busan-based real estate developer had never physically appeared in any of the gyemoim, literally association meetings.

The term gyemoim refers to a mutual interest group in which members pay a certain membership fee and then they take turns periodically receiving the entire sum.

Such groups were once used as mutual financing groups, typically by housewives to purchase homes or fund their children’s education.

Kim said his group, which still exists, comprises 25 people who each pay 4 million won per month. The gyemoim was started 35 years ago by a group of Gangnam entrepreneurs and celebrities, the source said.

Kim described himself as the head of a company in Cheongdam-dong, southern Seoul, which imports luxury products from Italy and distributes them domestically.

Kim said Choi, 60, joined the group in October 2013 around the time when Lee signed a construction deal with a Chinese company for a development project in Haeundae, known as the LCT, a 2.74 trillion won high-rise apartment zone.

Her older sister, Choi Soon-deuk, 64, joined in September 2015 after 16 local financial companies agreed to finance the LCT with about 2 trillion won in total.

Lee gained membership in 2011, right after the Busan metropolitan government granted approval of the LCT.

“I’ve known him for 30 years,” said Kim. “We’re really close. We used to get together whenever I traveled to Busan. I convinced him to join the group one day when he visited my shop to buy clothes for his daughter.”

Kim denied accusations that Lee used his connections with Choi Soon-sil to overcome any hurdles in the LCT project, claiming the Choi sisters were not close with other gyemoim members, including Lee, who never showed up in group meetings.

“They were really strange and quiet,” Kim recalled of the sisters. “Six months ago when it was Choi Soon-sil’s turn to receive the combined membership fees, we gathered in a hotel to grab a meal. But they sat away from us.”

The last time Choi paid her membership fee was in September, just weeks before the Choi-gate scandal broke, Kim said.