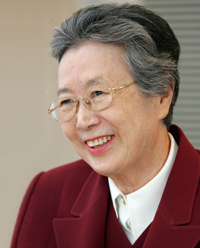 President Emeritus of Ewha Womans University Yoon Hoo-jung tendered her resignation on Wednesday, just two days before the Ministry of Education is to announce the results of its investigation into allegations that the university granted a free ride in admissions and high marks to Chung Yoo-ra, daughter of President Park Geun-hye’s friend, Choi Soon-sil.

Yoon, 84, was the first female scholar of constitutional law in Korea. She graduated from Ewha and started teaching at the university in 1958, served as the president from 1990 to 1996 and as president emeritus from 1996 to this year. From 2000 to 2011, she was also the chairwoman of the board of Ewha School.

Her tenure at Ewha stretches over nearly 60 years.

“I thank God that I was able to work my whole life at Ewha Womans University,” Yoon wrote in her statement, posted on the university website. “I leave hoping for an eternity of life and light at Ewha.”

Some students and professors of the university have been requesting Yoon’s resignation over allegations that the university granted Chung favorable treatment.

Chung was admitted to the university last year as a student equestrian athlete.

That year, the university created a new admissions process for equestrian athletes. Allegations surfaced that the dean of admissions ordered admissions officers to “pick the student with a gold medal,” and that Chung walked into the interview room carrying her gold medal from the Asian Games in 2014, even though it was won after the date acknowledged by the board of admissions.

This rule was allegedly ignored, however, in Chung’s case.

Additionally, Chung’s academic records show that she received high marks in her classes despite her frequent absences.

When these allegations surfaced in September, they empowered Ewha students, who for months had been demanding the resignation of the president after she sent in 1,600 police officers to subdue student protestors who opposed her plans to establish a school of continuing education. After professors took up their cause, Ewha’s then-president, Choi Kyung-hee, resigned.

The Education Ministry has been investigating corruption allegations concerning Chung since Oct. 31, and is set to release its results on Friday.

“I think Yoon felt the probe closing in on her,” said an Ewha professor on the condition of anonymity. “Because whatever decisions Choi made at this university, she could not have done it without Yoon’s approval.”

“Yoon ran the university like it was her empire,” the professors said in their statement. “We demand her to resign as she is the person at the center of the corruption allegations.”