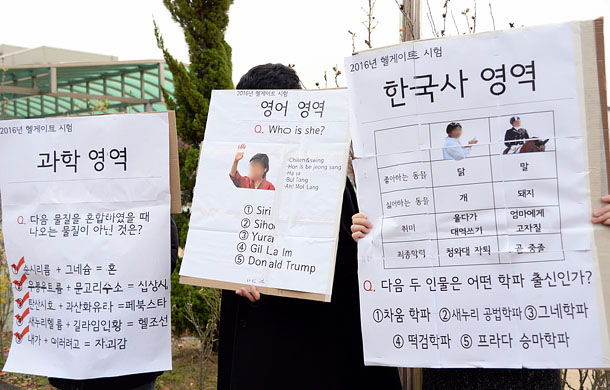 Hundreds of thousands of high school seniors and graduates took the state-administered college entrance exam on Thursday, hoping to gain admission to their dream universities.

The College Scholastic Ability Test (CSAT) is so notoriously competitive that a single incorrect answer could make the difference as to whether the examinee is accepted to his or her top choice.

But the festive spirit that used to spill out from the test-centers and onto the street when the exam ends a little before 6 p.m. was a bit subdued this year, as Choi-gate has taken its toll on Korea’s youth.

Nearly 200 teenagers gathered near the iconic Bosingak bell pavilion in Jongno District, central Seoul, at 7 p.m. in a show of defiance, calling on President Park Geun-hye to resign over an influence-peddling and abuse of power scandal involving her close friend, Choi Soon-sil.

The rally was organized by a local youth group that planned to host an hour-long relay speech and then march to the Seoul Finance Center, near the Seoul Metropolitan Government building. From 9 p.m., a second rally was scheduled to be held in the same Bosingak area by an 18-year-old student from Gimpo, Gyeonggi.

Just miles away last Saturday, the biggest street protest in nearly three decades was held with upwards of one million people taking part. Protesters of all ages and corners of society attended. Police estimated there were 260,000 people present.

Organizers expect the number of participants to shoot up even higher this weekend and the next, when the roughly 606,000 students who were busy studying for the CSAT may decide to join the national movement.

Earlier Thursday, as high school seniors walked into their test-centers in the morning, their juniors cheered them on near the entrance with large posters lampooning Park and Choi.

At Garak High School in Songpa District, southern Seoul, one student was seen holding a sign that read, “Sending you all the energy in the universe for the CSAT,” parodying a solemn speech Park gave on Children’s Day in 2015, in which she told youngsters, “the universe will help you if you desperately long for something.”

Down in Jeonju, North Jeolla, students held a picture of Park and wrote beneath five options in a multiple-choice question, asking who she was: Siri [Apple’s voice assistant], Siho [Choi’s niece], Yura [Choi’s daughter], Gil La Im [a pseudonym Park used at an anti-aging center in Gangnam] or Donald Trump.