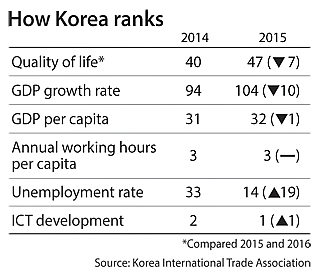 Korea ranked 47 among 61 countries for its quality of life, down seven steps from last year’s rank of 40 in an annual survey by the Korea International Trade Association.

The research is a collection of Korea’s ranks in 170 indexes related to economics, trade and society.

Koreans’ work life weighed on its score. According to the research, Koreans worked an average of 2,113 hours per year in 2015, ranking it third on the list among OECD countries. The global average was 1,756 hours.

The most recent percentage of unemployed ages 15 to 29 who lack the desire to get a job amid the sluggish economy was 18 percent in Korea, placing the country at 15th among OECD countries in 2014. This is higher than the U.S. rank of 22 and Japan’s place at 44th.

While Korea’s job market was struggling, the country’s consumer price index for 2015 moved unfavorably for Korean consumers, as it rose six ranks to 16th place among OECD countries.

Indexes related to Korea’s brand and image as a country for 2016 declined. Korea’s 2016 score for “image abroad of your country” - which is an assessment of local business leaders on whether their country’s image abroad helps them develop business internationally - was ranked 16th among 61 with 8.56 points out of 10, down one rank from last year. The country’s “attitude toward globalization” fell 10 ranks to 25th and “transparency of government policy” slid three ranks to 43rd.

The country was generally strong in areas related to communications and information technology: in 2015, it had the sixth largest broadband internet subscribers per thousand people among 34 countries and ranked first in terms of the index for Information and Communications Technology development among 167 countries. Its internet speed was also the fastest among 59 countries.