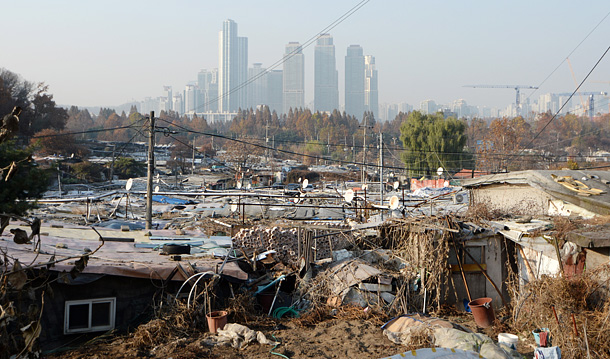 The view of one of the most expensive apartments in the country, Tower Palace in Daechi-dong, viewed from the Gangnam shantytown of Guryong Village. The Seoul government’s urban planning committee on Thursday said that it has accepted a redevelopment plan of Guryong Village to build 15- to 35-story apartments with 2,692 units. The village redevelopment is one of the few reconstruction and redevelopment projects still being considered as many have been cancelled since the government’s stricter regulations on sales transactions of such apartments in hopes of cooling the market and curbing household debt on Nov. 3. [NEWSIS]

A cold front is already headed toward the Korean real estate market as even the apartments in the four popular districts in southern Seoul - Gangnam, Seocho, Songpa and Gangdong - have seen their value drop significantly since the government restricted the sales rights of preconstruction apartments.

Instability since the U.S. presidential election has only dampened the market.

Between Nov. 3 when the government announced regulations on real estate transactions and Nov. 13, there have been only 25 sales in Gangnam. That’s just 4 percent of the 600 or so sales made from Sept. 3 and 13.

Last month, during this period, 20 apartments were traded in Gaepo, Jugong and Siyoung apartment buildings. This month there have been none.

The value of apartments has been falling as well. In the third week, the average Seoul apartment prices rose 0.08 percent compared to the previous week, according to the Korea Appraisal Board. This is a sharp drop from the 0.15 percent increase on Oct. 31, a few days before the government announcement. It even fell compared to last year’s 0.11 percent increase.

The four Gangnam districts were hit the hardest, as apartment values fell as the average Seoul apartment prices saw its growth decline.

Seocho, as of Thursday, saw its values decline 0.06 percent compared to a week ago, while both Gangnam and Songpa dropped 0.03 percent. Gangdong declined 0.02 percent. This is even a faster rate than last week when Seocho’s decline was 0.03 percent, Gangnam’s was 0.02 percent, and Songpa and Gangdong fell 0.01 percent.

However, as the government restricts Songpa, where Jamsil is located, from selling the rights of preconstruction apartments, its value has declined to 1.43 billion won. That’s a 100 million won loss.

The freezing sentiment seems to be spreading to the north of the Han River, or Gangbuk, as apartment trades in neighborhoods that pushed for reconstruction such as Sanggye-dong in Nowon District, Gangbuk and Dobong Districts have dropped. The apartment prices, however, were unaffected in the northern part of the Han River.

“Since the government’s Nov. 3 announcement, not only investors, but also homebuyers interested in the four districts in Gangnam have shrunk,” said Kang Yeo-jeong, head of the housing statistics team at the Korea Appraisal Board.

On Thursday, the Seoul government said that it has postponed discussion on redevelopment, citing further studies, particularly on the negative impact the neighborhood faces due to the lack of public transportation compared to the population.