Even though data shows that spending and earning are climbing, actual income and expenditures dropped when factoring in the inflation rate, a sign of the nation’s economic troubles.

Average monthly household earnings rose 0.7 percent year on year in the third quarter of this year to 4.45 million won ($3,767), and the growth remained under 1 percent for the fifth consecutive quarter, the government said Friday.

“Income from the workforce increased, as there were more people who are working and wages rose in general,” said Kim Ie-han, a director at the Ministry of Strategy and Finance. “Income coming from savings banks and properties, however, dropped significantly.” 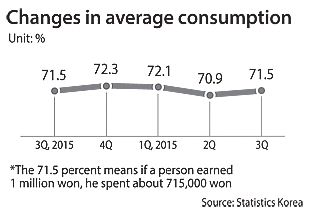 There were 318,000 more workers in the third quarter compared to the previous year and the average wage rose 4.3 percent in the same period, helping workforce income grow 1.9 percent, the government said.

Income from savings banks fell 53.9 percent year on year and revenue from properties dropped 31.9 percent. Korea’s interest rates at savings banks continued a decline to 1.2 percent in the third quarter, which is a sharp drop compared to 1.46 percent recorded in the third quarter of last year. Income from savings fell for the 15th consecutive month due to low interest rates.

Low-income earners were affected more by the weak labor market. Income growth rates for the lowest income earners in five categories fell 12.4 percent year on year in the third quarter, while the figure for level-five earners dropped only 6.4 percent in the same period.

The government said that this was the first time in seven quarters that spending on fashion-related items grew. In fact, sales of clothes at department stores rose 3.1 percent in the third quarter, as well.

People spent 1.1 percent less on alcohol and tobacco products in the third quarter compared to the previous year, and sales of communication-related products and services dropped 2.3 percent in the same period. “Cellphone-related products dropped 18.4 percent year on year due to the various factors, including Samsung Electronics’ Galaxy Note7 problem,” said Kim.

Average consumption remained unchanged at 71.5 percent, according to the statistics agency, which means if people earned 1 million won, they spent about 715,000 won.

The consumption figure hovered roughly around 85 percent during 2000s, but continued to fall beginning in 2011, with 70.9 percent being the lowest number since 2003, when the government started to compile the data in its current form.