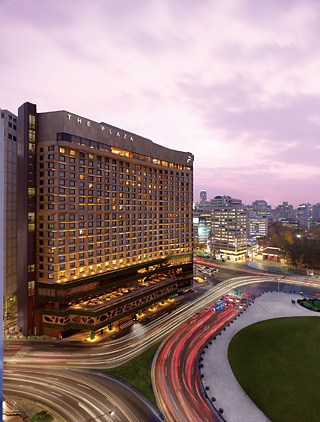 Left: Koreana Hotel, which stands at the foot of Gwanghwamun Square, said rooms were booked last week. Above: A view of The Plaza Hotel and Seoul Square. [JOONGANG ILBO]

“We even had a group of 15 people who came all the way from Jeju Island to participate in the protest,” Kim said.

More than 1 million people participated in one of the biggest antigovernment protests last Saturday, calling for President Park Geun-hye to resign. It wasn’t a joyous occasion, but the protests led to an unexpected profit for businesses near the protest venues in Gwanghwamun and City Hall in central Seoul including the hotels.

Kim says the turnover speed was also fast because people were eager to return to the streets, which led to even more profit.

“People were joining conversations at the next table even though they didn’t know each other. It was loud, but all in a friendly way.”

Convenience stores near Gwanghwamun and City Hall also saw a big jump in sales of certain products that could come in handy while demonstrating in a lengthy outdoor protest.

Hotels were also busy, greeting protesters who came in from outlying areas.

Koreana Hotel, one of the closest hotels to the main protest location, said all of its 337 rooms were sold out that day.

“The reservations were fully booked at around 2 p.m. on that day,” said the hotel spokesperson. “A lot of people made reservations through phone calls on that morning.”

Foreigners canceled most of their bookings, but the canceled rooms were immediately filled by domestic guests, Koreana said.

The Plaza Hotel in front of City Hall, which overlooks the entire assembly scene from some of the rooms, said their 410 rooms were sold out, except for one suite room that goes for 8 million won per night.

Nearly 80 percent of the rooms at the Plaza for today, when another protest is scheduled, are also booked, the hotel said.

“October is normally a good month in hotel business, but we definitely saw some more guests because of the protest,” the spokesperson said.

The Four Seasons Hotel, where the cheapest room goes for 400,000 won, also benefited from the crowds. The reservation rate on Nov. 12 was 30 percent higher than the usual Saturday, according to the hotel.

Families participating in the protest were the driving force behind the boosted business near Gwanghwamun, industry insiders said.

“Just like the year 2002 when people filled plazas in central Seoul to cheer the Korean team at the World Cup, a lot of hotel guests were eager to spectate the rally from hotels to be part of what will be a historical moment in the future,” said one industry insider.

Kim, the owner of the kimchi stew restaurant, also said there were many families at her place.

“We are carefully seeing if there will be another big protest this weekend,” said Kim. “We only have three staff members during the weekend, but we are going to increase it to five.”