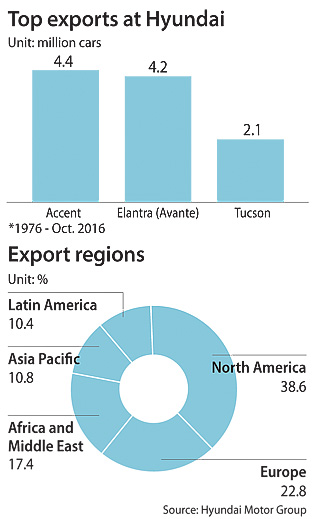 The Accent, a Hyundai Motor subcompact car, was the most exported model for the carmaker since it began its export business 40 years ago.

Hyundai Motor, the nation’s No. 1 carmaker, said Friday that the Accent sold 4.4 million units in the overseas market since 1994. The Accent was born in 1994 and became a steady seller in the domestic and overseas markets for its high fuel efficiency and compact size. The second-most exported model was the Avante. Also known as the Elantra in the overseas market, Hyundai has exported an accumulated 4.2 million autos so far.

The model was launched in 1990 and currently is Hyundai Motor’s best-selling car in Korea.

The Tucson, a sports-utility vehicle, came in third with accumulated exports of 2.1 million units.

Hyundai Motor saw the highest demand in North America. Since the carmaker launched in the region in 1983, 8.9 million units of its cars have been exported to North America. It makes up 38.6 percent of the entire export business of Hyundai Motor.

Europe came in second, although Hyundai Motor started its export business earlier there. Since 1977, an accumulated 5.3 million units were exported to Europe, 22.8 percent of the entire export pie.

Africa and the Middle East made up 17.4 percent, receiving 4 million units since 1976.

The automaker’s first export country was Ecuador in 1976. Hyundai, the world’s fifth-largest automaker when combined with its sister company Kia Motors, began by selling six Pony vehicles to the South American country.

The Pony was Korea’s first domestically-made vehicle with a self-developed engine. The model was discontinued in 1990.

“The localization, which took wings in 2000, when Hyundai Motor started occupying local manufacturing plants, helped achieve such a feat,” the carmaker said in a statement Friday.

Hyundai Motor celebrated the 40th anniversary of its export business in Ecuador on Wednesday.

“The 23 million cars we have exported so far has been the driving force behind Korea’s economic growth for the past 40 years,” said a Hyundai Motor spokesperson. “Having only one year left until the 50th anniversary of our company, we will try even more to become a beloved auto company globally.”