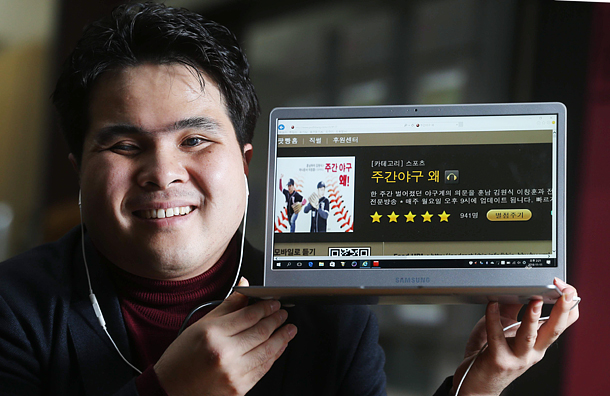 Kwon Soon-chul became a baseball fan 24 years ago when he first heard a description of a ball game on the radio. Fascinated by the sound of a bat hitting a ball, Kwon pictured the game as he replayed the recorded broadcast. His love for sound led him to become a sports broadcaster. The only thing is, Kwon cannot see.

But that hasn’t stopped him from pursuing his dream. Kwon headed a broadcasting club as a high school student and appeared on Korea Blind Internet Cast in 2007. Currently, he shares the experiences of the blind on KTV’s internet radio program “Take My Hand” and KBS 3 radio’s “Blue Sky.” Kwon started producing his baseball podcast, “Weekend Baseball, Why,” last year. He now works as a broadcasting producer in addition to already being a masseuse. Not only does Kwon direct and edit the program, he often appears on the radio panel, too.

“Ratings for sports programs are relatively low,” he says, “so it’s difficult to find them nowadays. But I want to make programs that let the audience enjoy baseball through sounds, as I have done.”

“Weekend Baseball, Why” - hosted by Kim Won-sik, a podcast host, and Lee Chang-hoon, a blind announcer - broadcasts weekly baseball news via Podbbang and iTunes. Even during the offseason, Kwon continues to broadcast on various topics, keeping up with the current news involving baseball players. Kwon’s efforts have paid off, too, as his program was recently ranked third out of all Koreans sports podcasts.

“Baseball games are progress at a relatively slow pace,” he says, “so the blind can understand more than 90 percent of what’s going on in real time. There’s enough time when batters are exchanged or catchers give out signals, which I use to imagine what will happen next. It’s fun to compare my prediction with what really happens.”

The program is usually recorded at Lee’s house. Kwon then takes the recorded files with him and edits them using Sense Reader, a reading program for the blind. When editing, he says he focuses “on making the program fun, as well as professional.” Sports writers, commentators and professional baseball team doctors often appear on the program by call-in.

Kwon faces difficulties in meeting the production cost, but says he is determined not to give up on his dream.

“The Korea Blind Internet Cast used to support my program,” he says, “but they’re going through financial difficulties themselves and can no longer do so. My program hasn’t received advertisements yet, so I have no extra source of income. But I think of people who listen to the radio and find hope. They make me realize I can’t quit.”

Kwon’s dream is to both produce and host a radio program. He says, “I want to break the prejudice that jobs for the blind are limited. I will pave the way for the blind who want to pursue production.”