Michelin star chef’s aged black Angus is a cut above

Michelin star chef’s aged black Angus is a cut above 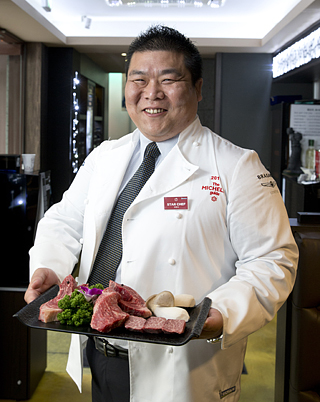 Among the 24 restaurants that earned one star in the 2017 edition of the Michelin Guide Seoul, there was one unfamiliar name: Bo Reum Soei, the Seoul branch of Heuk So Rang, a restaurant on Jeju Island that specializes in heugu, or black Angus, barbecue.

“I never thought Michelin stars were relevant to me,” says Kim Kyung-soo, 33, the owner of the restaurant. “I have no special secret. I’m just glad the quality of the meat at my restaurant is appreciated.”

There are dozens of Korean restaurants in southern Seoul that serve 1++ grade hanwoo, or Korean beef, so what led to a restaurant that serves black Angus being awarded a star? One factor may be the aging method he uses.

“Beef, to be honest, is far from beneficial to human health,” he says. “I would even recommend refraining from eating it, since the melting temperature of beef fat is higher than the human body temperature, so the fat won’t be discharged from your body. That’s the problem. But aged black Angus has a lower melting point, so it’s not such a concern.”

He said he spent hundreds of millions of won and five years researching the right method to age beef.

“I have gone through numerous trials and errors to find the aging method I was satisfied with,” he says. “Spending the money I earned since my early 20s, which I got from running a bar and restaurants, on research and development has born fruit today.”

Many restaurants in Seoul serve black Angus, but those specializing in it are rare.

“It’s true that black Angus tastes great,” Kim says. “But the breed weighs half an ordinary Hanwoo cow and the breeding period is 38 months on average, or six months longer than others, so there’s little reason for restaurants serve this type of beef.”

Kim first encountered black Angus by accident when visiting his middle school friend, Song Dong-hwan, who had just graduated with a degree in livestock industry and was working at a ranch that was rearing 300 black Angus cows and 50 Hanwoo cows in Seongsan, Jeju. Seeing a potential business opportunity, the two friends bought the farm.

Kim says that while many people believe Wagyu, or Japanese beef, is the ancestor of black Angus, its true origin is Jeju Island. Genetic evidence, however, indicates that Angus originated in Scotland, Wagyu is the result of crossbreeding European and Asian cattle in the 1800s and Hanwoo is descended from a breed of Chinese yellow cattle known as zebu.

Kim also says black Angus was nearly wiped out here by the Japanese government during its colonial rule, and that the Korean government invested heavily in restocking the breed.

“I felt a sense of duty to revive the black Angus breed with my own business,” he says, “after hearing that people avoid rearing it because it’s so costly to do so.”