Images of the president prove bad for business

Images of the president prove bad for business 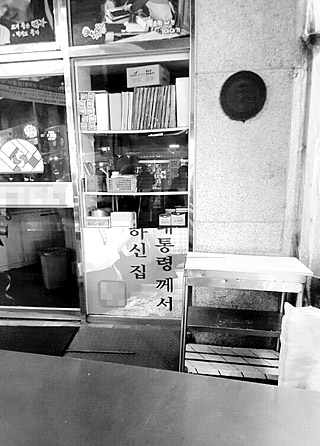 Signboards of President Park Geun-hye are no longer something visitors to Daewangam Park in Dong District, Ulsan, will encounter. The Dong District Office placed the two signboards at the park’s entrance and plaza to commemorate the president’s visit during August 2015, but recently removed them.

“We received a call saying that the president’s photo was damaged,” said a park official, “so we decided to remove the signboards. Since they don’t contain important information for visitors, we don’t have plans to rebuild them.”

But the two signboards are not the only traces of President Park disappearing, as the public’s outrage over the unprecedented influence-peddling scandal involving the president’s longtime friend, Choi Soon-sil, seems to have reached a tipping point. Restaurant and store owners of popular destinations are quick to remove the president’s photos. One restaurateur said, “The fact that the president visited my store no longer attracts customers.”

Shinjeong Market in Nam District, Ulsan, which was also visited by Park during her summer vacation, is no exception. A tteok (rice cake) store removed the president’s photos last week and a nearby fruit store followed suit. The store owner said, “I had no choice, as customers made complaints such as ‘We won’t buy your fruits unless her photos are taken down.’” A restaurant owner in the same district has decided to put all alcoholic beverages on sale in order to help the public through this difficult time, and plans to continue to do so until the president resigns.

Visitors to Seosan Birdland, an ecological park for migratory birds in South Chungcheong, have also complained about Park’s photos there, which were on display as part of an exhibition. The institute soon gave in to the visitors’ demands to remove the images.

Park’s photos at Bitown, a welfare institute for senior adults in Gwangju, were also taken down last week. Park made a visit to Bitown during her presidential campaign in 2012. An official from the institute said they feared complaints, as Park’s approval rating in Honam region has plummeted to zero percent.

Small and medium businesses were also quick to respond to public anger. A company in Daejeon, which was given the presidential award for creative economy in 2013, deleted the president’s photos from its website. “Many of my friends recommended removing the photos,” the company owner said, “because the company won’t benefit from them now.”

“The Choi-gate scandal is negatively influencing small and medium businesses,” said Om Te-sok, a public administration professor at Seowon University. “Removing traces of the president is proof of the public’s anger, as well as their sense of betrayal.”