Drama with an international twist: German-born actress looks to land a leading role in Korea features

Drama with an international twist: German-born actress looks to land a leading role in Korea features 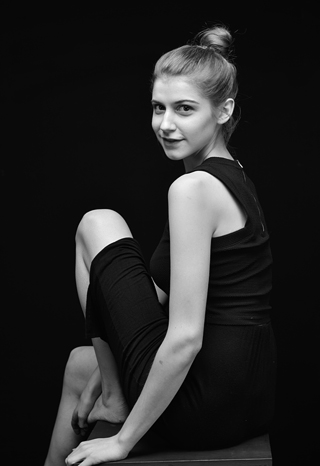 “I want to be an actress who can convey the culture and emotions that are unique to Koreans,” says Yoon Anna, a German-born stage actress who is gaining popularity in Korea. [YOON ANNA]

German stage actress Anna Rihlmann was a girl with many dreams. Growing up, she dreamed of becoming a reporter, police officer, film director and even a urologist. In an effort to discover what she loves, she interned in an array of fields, so much so that it started to concern her professors at the University of Tubingen in Germany, where she studied journalism and broadcasting and minored in Korean studies. Fortunately, she finally realized her calling upon settling here two years ago: to become an actress.

Having first visited Korea through a church exchange program when she was still in high school in 2008, she instinctively felt an emotional connection to Korea.

Her love for Korea can be seen in her graduation thesis that dealt with Im Kwon-taek’s film “Genealogy,” which shows how Koreans were forced to change their names during the Japanese colonial era. “Learning history is important in understanding the emotions of Koreans,” said the actress.

Named Yoon Anna in Korean after her homestay family’s surname, the 24-year-old told the Korea JoongAng Daily that she was surprised to learn that theater and film departments are common in universities in Korea.

“In Germany, people need to go to a specialized university to study theater and film, which comes with a costly tuition fee. However, I was surprised to find out that the department is so common in Korea.”

This opportunity led Yoon to apply for admission to the Korea National University of Arts in 2015. As part of her application process, she performed a monologue from Anne Frank’s “The Diary of a Young Girl,” which she translated into Korean. Although she thought she would fail due to other candidates’ emotional acting that contrasted with her calm monologue, she was able to make it through, becoming the first foreign graduate student to study acting in the school’s history.

As part of the effort to become a successful performer, Yoon also joined a drama company called Dream Play, through which she has participated in several performances, including “Land without Nation: Forgotten Memories,” a play that revolves around the Sewol ferry sinking, which she co-wrote and performed in as the lead actress. Yoon is also set to play Elisabeth J. Shepping, who dedicated her life to working as a nurse in the slums of Korea and founded Hanil University and Presbyterian Theological Seminary, the nation’s first theological school for women, as well as the Nurses’ Association in Korea, in the coming documentary “Shepping,” which is set for release in December. “I look like Shepping and I also share her love for Korea,” says Yoon.

Yoon is also set to star as a lesbian in the short film “Blending Colors.”

Despite her fluency in Korean and deep love for the country, Yoon says that it isn’t always easy for a blonde, blue-eyed foreigner to be an actress in Korea.

“Many told me that since the society has become globalized, I would get opportunities to play minor roles as a foreign daughter-in-law in dramas. However, I’m more interested in movies and theater. Also, I wish to become an actress whose role is not limited to being a foreigner.”

Yoon’s dream often requires effort. “I repeat the same lines hundreds of times until I can convey the emotions of a character and pronounce Korean without a problem.”

Yoon added, “I know it is not easy and I’m aware that it may take some time, but I want to challenge myself. Since the world is changing, I believe foreign actresses are also required [in Korea]. With my education background abroad, I believe I can become a refreshing actress that Korea needs.”

Strong-willed, she isn’t the type to wait for a director to provide her with a suitable role. So instead of waiting, Yoon started writing her own scenarios, in which she stars as the main protagonist. Most of her scenarios touch on social issues, in which she plays the victim.

“I’m very interested in social issues. Maybe it’s the influence of the filmmaker Kim Ki-duk” whose work Yoon respects and is interested in.

Through her work, the actress wishes to question her place in society.

“I believe films and plays are very crucial in making social influence because performers can deliver social or political messages through their works.”