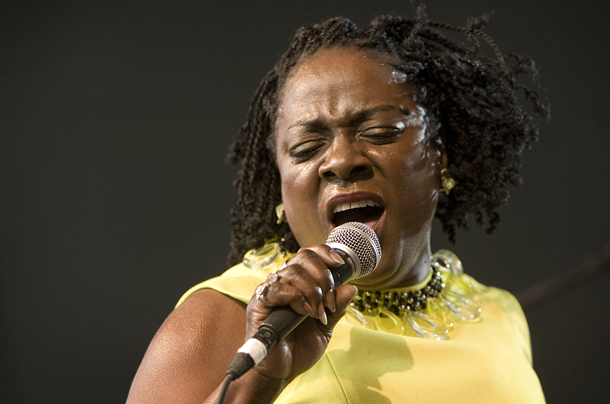 NEW YORK - Sharon Jones, the stout powerhouse who shepherded a soul revival despite not finding stardom until middle age, has died. She was 60.

Jones’ representative, Judy Miller Silverman, said Jones died Friday at a Cooperstown, New York, hospital after battling pancreatic cancer. Loved ones and members of her retro-soul band, the Dap-Kings, were among those surrounding her, Silverman said.

The story of Jones’ battle with cancer, first diagnosed in 2013, was told in Barbara Kopple’s documentary, “Miss Sharon Jones!” released this year. Though she triumphantly returned to the stage in 2015 after the cancer went into remission, Jones late last year announced its return. Still, Jones mounted another comeback with the defiant single “I’m Still Here” and hit the road again this summer with the Dap-Kings even while undergoing chemotherapy.

“You got to be brave,” a debilitated Jones told the Associated Press in July, in between tour stops. “I want to use the time that I have. I don’t want to spend it all laid up, wishing I had done that gig.”

Jones’ death was immediately noted on social media and throughout the music industry. British producer Mark Ronson, who brought the Dap-Kings in to play backing band to Amy Winehouse on her breakthrough album, “Back to Black,” said, “Sharon Jones had one of the most magnificent, gut-wrenching voices of anyone in recent time.”

Jones returned to the music scene with a 2014 Grammy Award nomination for her album “Give the People What They Want” and an album of holiday classics called “It’s A Holiday Soul Party!”