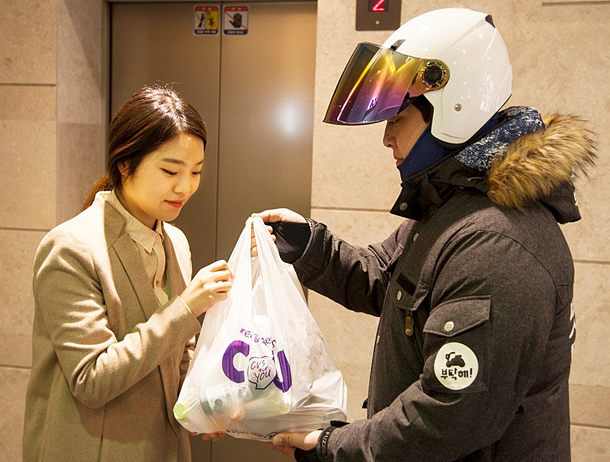 A customer receives products from the CU convenience store that she ordered through a delivery app. [CU]

It has been a year since CU, the biggest convenience store chain in Korea, officially started delivery to its customers, and the company said this week that the number of delivery orders increased more than 10 times since last year. The delivery service had been in trial from 2010 until November 2015, its official launch.

After providing cheap delivery service for an entire year, the company analyzed consumption patterns over the year.

There was a correlation between the number of offices in the region and the frequency of delivery.

The total number of times customers used the delivery service rose 11.3 times compared to last November, while the number of stores providing the service expanded only 2.5 times.

As popularity for the delivery system rose, CU also took the chance to sell more of its products in time for the Pepero Day on Nov. 11, a day when people exchange Pepero cookie sticks with their friends and sweethearts.

By allowing consumers to pre-order Peperos via mobile phones and the Internet to a specific place and time of their choice, 55 percent of a month’s average orders were made in the 10 days before Nov. 11.

The usual best-sellers include everyday goods such as two-liter water bottles, milk and haetban (ready-cooked rice).

“Convenience stores are evolving by providing the consumers with much more user-friendly channels, and we are getting closer to people’s everyday lives with our on-demand services,” said Lee Eun-rak, managing director of BGF Retail. “We’re planning to extend the delivery system to more stores in the coming days, to enlarge our coverage area.”

The service currently allows delivery for less than 3,000 won ($2.54) if customers purchase more than 10,000 won in products. Orders can be made either through the CU mobile app or the Mesh Korea e-commerce app. Products that need age verification such as alcohol and tobacco are not available.