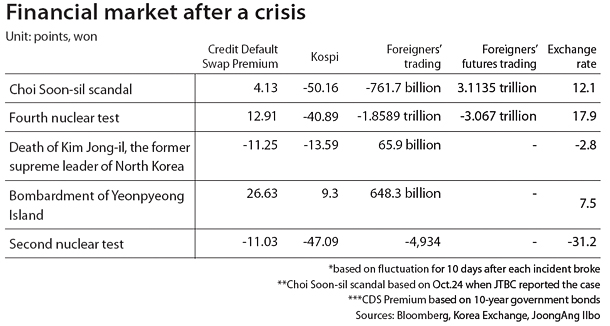 Han Jin-young, a 42-year-old worker at an overseas-based trading company, is frequently asked about the troubles these days in Korean politics from foreign customers. Han can’t help but worry about the impact Korea’s recent political affairs related to President Park Geun-hye’s close friend Choi Soon-sil could have on his brisk business.

The Choi scandal, which started off hurting the nation’s political world, is threatening the country’s economy. Already, heads of major conglomerates have been called by the prosecution for their potential engagement with Choi and business operators are voicing concerns that the national exposure is driving away foreign buyers.

“I have been mocked by big buyers from China that ‘Korea has a low-level of political culture,’” says Lim Jung-min, a 38-year-old seller for display panel production facilities in China. “I’m worried of Korea and national companies’ images being tainted.”

A Korean professor who teaches at a New York-based business school said, “The recent political risks will be transferred to an economic crisis.”

Considering the trust Korean companies have built on the world’s business scene, the recent scandal isn’t likely to hit export sales immediately. However, foreigner customers are citing chances of the scandal growing into a long-term social and political chaos that could ultimately deteriorate Korea’s business conditions.

Overseas concerns over the Korean economy can be spotted first in the financial market.

The Choi scandal left behind a similar or bigger hit in the financial market compared to big issues related to threats from North Korea, such as its four nuclear tests, the shelling of Yeonpyeong Island, the Cheonan ship incident and the death of former supreme leader Kim Jong-il.

For 10 days after each incident, Seoul’s main bourse Kospi spiraled and the rate was steepest after the recent Choi scandal erupted. Since Oct. 24, when the Korea JoongAng Daily’s affiliated broadcasting channel JTBC reported the Choi scandal, the nation’s stock market index has fallen 50.16 points through Nov. 7.

Foreign observers’ major point of interest is on the characteristics of the political crisis. They are shocked that the case was not limited to high officials and involved a normal citizen without any special position who decided important state affairs and ultimately controlled the nation’s system behind the scenes.

The turmoil is similar to what Argentina and Venezuela went through considering their economic development soared near the level of developed nations then fell due to political instability and difficulty establishing suitable economic policies.

“While demand is shrinking worldwide, Korea has [already] seen one of two important pillars - politics and the economy - of the country fall,” said Yoon Jeung-hyun, former Minister of Strategy and Finance. “To save the nation’s economic plans and administrations from being paralyzed, both the Blue House and opposition parties need to stop the political strife and cooperate to find resolution.”

Still, insiders say the Choi scandal may not have as much of a negative impact on the Korean economy, as many are concerned that larger world issues such as the election of Donald J. Trump as president of the United States, Britain’s exit from the European Union and Japan’s conservative shift may have a bigger effect on the markets than the local scandal.

According to Catherine Germier-Hamel, CEO of Millennium Destinations, a Seoul-based consulting firm, there are already a number of scandals that could make Choi’s scandal relatively less visible. However, Hamel added that Korea’s political leaders need to show earnest efforts to exit the scandal to avoid giving the impression the country is headed for deeper chaos.