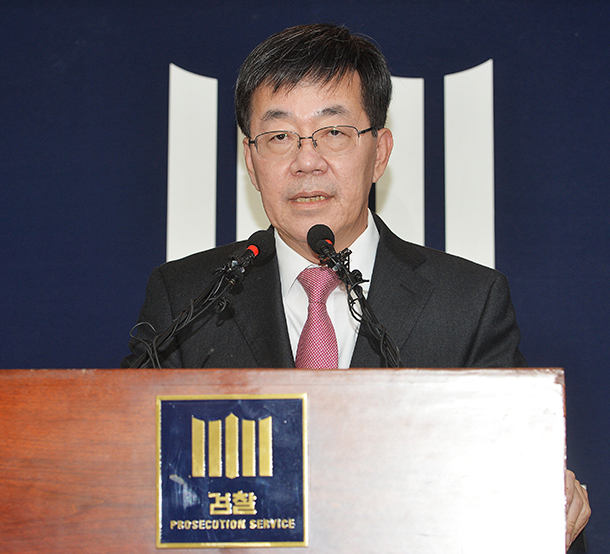 The prosecution’s decision to label Park a co-conspirator in the massive corruption scandal has offered legal ground for lawmakers to move ahead with a presidential impeachment motion.

The special investigation team of the prosecution held a briefing on Sunday to make an interim announcement regarding its probe into Choi Soon-sil, Park’s longtime friend; An Chong-bum, former senior presidential secretary for policy coordination; and Jeong Ho-seong, Park’s former personal secretary for 18 years. After weeks of interrogation, the three suspects were formally charged on Sunday, according to Lee Young-ryeol, chief of the Seoul Central District Prosecutors’ Office who headed the special investigation team.

“Based on the evidence secured so far,” Lee said, “the special investigation team concluded that the president colluded with Choi, An and Jeong for most parts of their crimes. But we cannot indict her because of her immunity stipulated in Article 84 of the Constitution.”

The prosecution created the special investigation team on Oct. 27, 2016. It raided the presidential office, residences of Choi, An and Jeong and their offices, Lee said, and secured critical pieces of evidence, including Jeong’s mobile phone, An’s work memo book and presidential office reports.

The heads of nine conglomerates, including Samsung Group, who each had one-on-one meetings with the president, along with others involved, were questioned concerning allegations that companies were strong-armed into donating to the Mi-R and K-Sports foundations, Lee said. Choi was suspected of influencing the establishment and operation of the foundations and embezzling money from them. Based on their initial probe, he said, the prosecution managed to confirm this, as well as the allegation that Jeong leaked confidential information to Choi.

In her first apology on Oct. 25, 2016, Park said she sought Choi’s advice in writing and editing her speeches during the presidential campaign and early days of her presidency, but stopped after Blue House aides became available to her.

After the prosecution’s announcement, the Blue House said the president’s lawyer, Yoo Yeong-ha, will make an official response later in the afternoon. The presidential chief of staff hosted meetings throughout the day to address the situation.