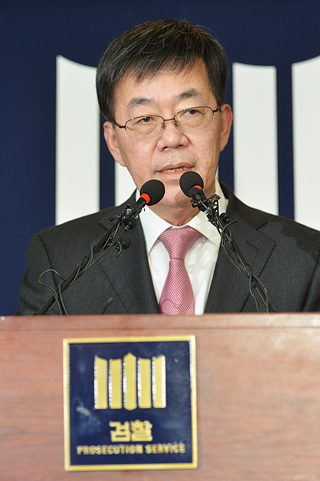 The prosecution’s decision to label Park a co-conspirator in the massive corruption scandal has offered legal ground for lawmakers to move ahead with a presidential impeachment motion. Park is the first president in Korea’s history to face a criminal investigation as a primary suspect.

Park, through her spokesman and lawyer, made it clear on Sunday that she will not cooperate with the prosecution’s probe, questioning her own prosecutors’ political neutrality. She also denied all charges against her.

The special investigation team of the prosecution held a briefing in the morning to make an interim announcement regarding its probe into Choi Soon-sil, Park’s longtime friend; An Chong-bum, former senior presidential secretary for policy coordination; and Jeong Ho-seong, Park’s former personal secretary for 18 years. After weeks of interrogation, the three suspects were formally charged, according to Lee Young-ryeol, chief of the Seoul Central District Prosecutors’ Office who headed the special investigation team.

“Based on the evidence secured so far,” Lee said, “the special investigation team concluded that the president colluded with Choi, An and Jeong for most parts of their crimes. But we cannot indict the president because of her immunity stipulated in Article 84 of the Constitution.”

The prosecution said Article 30 of the Criminal Act, which defines complicity, was applied in Park’s case.

“When two or more persons have jointly committed a crime, each of them shall be punished as a principal offender for the crime committed,” the law said, indicating that Park will be treated the same as Choi, An and Jeong.

The prosecution created the special investigation team on Oct. 27. It raided the presidential office, residences of Choi, An and Jeong and their offices, Lee said, and secured critical pieces of evidence, including Jeong’s mobile phone, An’s work memo book and presidential office reports.

The heads of nine conglomerates, including Samsung Group, who each had one-on-one meetings with the president, along with others involved, were questioned concerning allegations that companies were strong-armed into donating to the Mi-R and K-Sports foundations, Lee said. Choi was suspected of influencing the establishment and operation of the foundations and embezzling money from them. Based on their initial probe, he said, the prosecution managed to confirm various corruption charges, as well as the allegation that Jeong leaked confidential information to Choi.

In her first apology on Oct. 25, 2016, Park said she sought Choi’s advice in writing and editing her speeches during the presidential campaign and early days of her term, but stopped after Blue House aides became available to her.

The 33-page indictment explained in detail that Park was the mastermind behind the extortion scheme.

The president made the plan around July 2015 to establish nonprofit foundations and fund them with contributions from companies that are members of the Federation of Korean Industries. Park ordered An, then senior economic affairs secretary, on July 20, 2015, to set up one-on-one meetings with chairmen of the top 10 conglomerates. An went ahead and scheduled the meetings with seven tycoons on July 24 and 25, 2015, the prosecution said.

After the meetings, Park ordered An to establish cultural and sports foundations, each worth 30 billion, by collecting donations from the companies. Park also requested Choi to operate the cultural foundations. After Choi named the project Mi-R Foundation, Park formally titled it.

The indictment also showed that Choi created the plan for the K-Sports Foundation in December 2015 and sent it to Jeong. An was ordered by Park later that month to establish the foundation based on the plan and ordered to open an office in Gangnam, southern Seoul. An went ahead and forced the Federation of Korean Industries to establish the foundation, as they had done for the Mi-R Foundation.

The indictment included a specific incident in which Park directly pressured a tycoon to contribute to a construction project designed to benefit Choi. According to the indictment, Park ordered An to set up an exclusive meeting with the chairman of Lotte Group, Shin Dong-bin, on March 14, 2016. After the meeting, Park ordered An to follow up with Lotte Group’s promise to pay 7.5 billion won for a sports facility construction in Hanam, Gyeonggi, the indictment said. After the meeting, Shin also ordered group executives to follow Park’s demand.

Lotte, which had already contributed massive funds to the two non-profit foundations, tried to lower the amount to 3.5 billion won, but later changed its position and gave 7 billion won in May 2016 in fear of possible repercussions, the indictment said.

Park’s lawyer, Yoo Yeong-ha, said the president will not cooperate with the prosecution’s probe, challenging its decision to name her as a primary suspect.

“The prosecution made repeated speculations and assumptions without thoroughly evaluating evidence and constructed a house of illusion based on their wish,” Yoo said. “It’s a house of cards destined to collapse during the upcoming independent counsel probe and later in the courtroom.”

Yoo added, “The prosecution announced that it has reached a conclusion even before questioning Park. It clearly showed that this investigation cannot be trusted. I will not cooperate with the prosecution’s probe and will prepare for a future probe by a neutral independent counsel.”

Questioning the political integrity of the prosecution’s probe, the Blue House also said it will brace itself for a presidential impeachment. “[Park] prefers this controversy to be settled through a legitimate process that can clearly rule on the president’s responsibility under the Constitution and relevant laws,” presidential spokesman Jung Youn-kuk said.

Although in some countries impeachment would be the worst possibility for a sitting president, in Korea it is not, as the process could take more than six months and the Constitutional Court must rule on a presidential impeachment; in 2004, for example, it rejected President Roh Moo-hyun’s impeachment after 64 days of deliberation.

Earlier in the afternoon, eight political heavyweights of the opposition parties, including six presidential contenders, held an urgent meeting and agreed that the National Assembly must start a process to impeach Park. “We confirmed that Park’s charges are clear and grave enough to push forward an impeachment,” their agreement said. “We asked the three opposition parties and the National Assembly to simultaneously push forward a national movement to pressure her resignation and start a discussion to impeach her.”

They also urged the National Assembly to recommend a new prime minister to oversee state affairs during the impeachment process.

A group of Saenuri politicians who are not loyal to Park also held a meeting and concluded that Park must be expelled from the party and the Saenuri Party must also join the process to impeach her.

A presidential impeachment requires a two-thirds vote by the 300-member National Assembly. As of now, the three opposition parties and liberal independents occupy 171 seats.

If the National Assembly passes a motion to impeach the president, Park’s power will immediately be suspended, while the prime minister will then oversee state affairs as acting president. The Constitutional Court will then deliberate the legality of the impeachment in a process that can take up to six months.