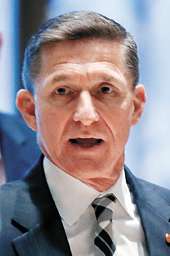 “Using the word ‘vital’ to describe the bilateral alliance is a first,” a diplomatic source told the JoongAng Ilbo.

Gen. Flynn, who has been offered the post of national security adviser by Trump last week, also emphasized the need to prioritize responses to the threat from the North’s nuclear program. Flynn was Trump’s security adviser during his campaign and is a former director of the Defense Intelligence Agency.

He added, “It was agreed that a strong and systematic pressure on the North’s leadership should be expected. We all know that a dialogue with the North is always an option, but one that has not happened because of North Korea’s refusal to denuclearize.”

Cho said the roughly one-hour meeting with Gen. Flynn did not lead to discussions on the possibility of increasing the South’s share of payment in maintaining U.S. troops on its soil, the U.S.-led Terminal High Altitude Area Defense system or the renewal of talks to sign the General Security of Military Information Agreement with Japan.

The meeting was joined by Edwin Feulner, former president of the Heritage Foundation and a senior adviser in Trump’s transition team; Walid Phares, Trump’s national security adviser in the transition team; and John Bolton, former U.S. Ambassador to the United Nations, who is reportedly on the shortlist for secretary of state.

“More diplomatic trips by Korean government officials will follow,” Cho said. “Many experts recommended meeting with the Trump administration as soon as possible, given that they are likely to be forming the specifics of the U.S. foreign policy now.”