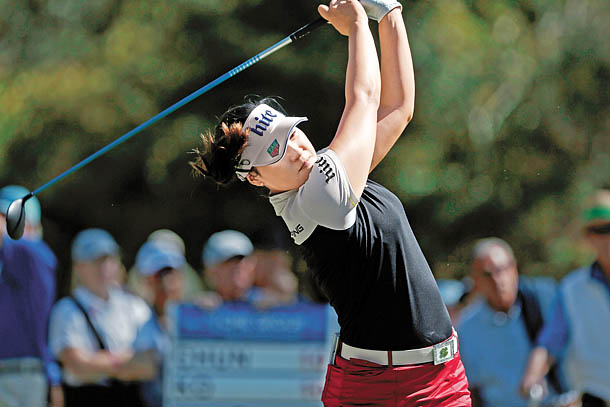 Korean golfer Chun In-gee tees off during the CME Group Tour Championship golf tournament in Naples, Florida, on Sunday. Chun concluded the rookie year in the LPGA with two honors; the Vare Trophy and Rookie of the Year award. [AP/NEWSIS]

Korean golfer Chun In-gee finished her rookie season at the LPGA on a high note by bringing home two titles, a sign that we may be looking at yet another Korean golf star.

After finishing in seventh place on Sunday with 13-under 275 at the CME Group Tour Championship at Tiburon Golf Club in Naples, Florida, Chun claimed the Vare Trophy, an honor given to the golfer on the U.S.-based tour with the lowest scoring average for the season, nipping Lydia Ko of New Zealand, No. 1 according to the latest Rolex Rankings, along the way. Ko finished the event 11-under, unable to cut the deficit between her and Chun in order to take the title off Chun’s hands.

Entering the fourth round of the CME Group Tour, on Sunday, Ko was ahead by 0.006 strokes and the dynamics of the competition between the Korean and New Zealander saw no change throughout the fourth round - until the par-4 13th hole.

After hitting a brief bump at the ninth hole where she recorded a double bogey, Ko fired off three straight birdies from the 10th to 12th rounds. Chun had similar final round record card as Ko up until the ninth hole with one birdie, one bogey and one double bogey. But the momentum started to shift in Chun’s favor after the 12th.

Just coming out of parring the 12th, Chun nabbed a birdie on the 13th. By the 16th, her average score was 69.625 while Ko’s stood at 69.596. Then, from the 16th to 17th, Chun carded two back-to-back birdies, while Ko claimed one birdie but also lost a stroke after suffering a bogey at the 17th. Ko’s bogey narrowed the deficit to 0.001. And so, the recipient of the Vare Trophy this year came down to the final hole of the day.

Just when Chun buried her birdie putt inside the hole to finish the season 69.583 shots on average, Ko failed to drain her birdie shot, concluding her season with 69.596 shots and claiming the Vare Trophy by less than a stroke.

The last one to achieve the feat was Nancy Lopez, World Golf Hall of Famer and four time LPGA Tour Player of the Year award winner from the United States.

Another notable aspect of Chun’s accomplishment is that her margin of victory in Rookie of the Year race was the third-largest of all time. Chun claimed this year’s Louisse Suggs Rolex Rookie of the Year award with 1,358 points total, leading the runner-up Megan Khang of the United States by 832 points. Khang finished her rookie season with 526 points after two top-10 finishes.

“It was a big honor for me,” said Chun, “because to have my name next to legends, and then I play with Lydia [Ko] and Amy [Yang] today… and I always play with them. I know she’s great, but Lydia is a great player. I learned from her a lot.”

Chun has had a decorated first year in the tour. Aside from the two honors she’s collected, the 22-year-old rookie finished in the top 10 in 11 different events. Ranked No. 3 in the world, Chun’s also the winner of this year’s Evian Championship, the last major event of the season, which took place in September. After lifting the trophy from the Evian Championship, she became the second player in the LPGA history to win her first two titles in major events, a feat matched only by her coach from the Olympics, and Korean golf legend, Pak Se-ri. Pak claimed her first two wins from the 1998 McDonald’s LPGA Championship, the predecessor of the current KPMG Women’s PGA Championship, and the 1998 U.S. Women’s Open.