Walking around the city streets learning to be a flaneur : Hermes exhibition celebrates movement and urban discovery

Walking around the city streets learning to be a flaneur : Hermes exhibition celebrates movement and urban discovery

From top to bottom: The Walking Sticks section where visitors are invited to walk through a wardrobe, into the “Wanderland”; Korean graffiti artist Jay Flow collaborated with Hermes to create the 8th section, “The Street Artist”; and “The Passage” section that features a domed arcade that was first introduced in Paris in the 19th century. Display windows of different stores on each side of the arcade add a treat for the flaneurs. [HERMES KOREA]

To help consumers better understand the philosophy behind a brand as well as offer them the opportunity to enjoy culture, fashion brands often host art exhibitions. Hermes, the French high fashion and luxury goods manufacturer, began selecting a theme each year starting in 1987 - the brand’s 150th anniversary year - as a way to give consumers insight into the direction of the brand.

The house’s artistic director Pierre-Alexis Dumas announced the latest theme “Flanerie,” a French word that can be described as “wandering around freely” in 2015, and organized an art exhibition titled “Wanderland.”

Since then, the exhibition has been “flaneur-ing” around the world, and arrived at Seoul’s D Museum in Hannam-dong on Nov. 19.

This French word has no direct English translation, explained Hermes, but said it can be best described as an “aimless stroll, yet with curiosity and an open-mind” - an essential part of a Parisian gentlemen’s life in the 19th century. While organizing the exhibition, Dumas explained that flanerie is a “wonderfully liberating art of urban wandering, and a profound nature of Hermes.”

For the Seoul exhibition, which runs until Dec. 11, Hermes made the exhibition a little more interactive for the busy Seoulites, inviting them to take a slow stroll through the exhibition with a walking stick in hand.

Each walking stick has a lens on top of the stick that looks like a magnifying glass. Using the lens, a visitor can peek into moving images that are shown on small screens installed throughout the exhibition. With the naked eye, nothing is visible, but by looking through the lens, sights commonly seen while taking a walk in Paris, like pigeons for example, are visible.

“After discussing about the ways to make this exhibition more intimate with the visitors, we’ve designed this walking stick for the Seoul exhibition so that visitors can have more fun discovering the hidden enjoyments while taking a stroll,” said Hubert Le Gall, the scenographer behind the exhibition during the press preview last Friday. 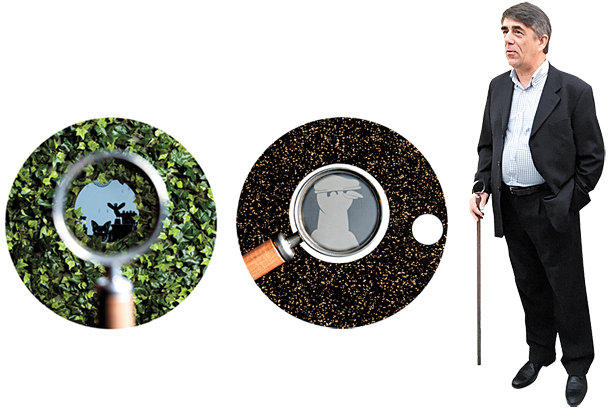 Curator Bruno Gaudichon, right, holds the walking stick that was designed for the Korean exhibition. By using the lens that’s on the walking stick, visitors can view the moving images being shown on special screens that are hidden throughout the exhibition. [HERMES KOREA, YIM SEUNG-HYE]

To appeal to visitors of the social media-friendly generation, the exhibition, curated by Bruno Gaudichon, is full of moving objects, music and certainly, “surprises,” the curator says, “that the visitors should really take time walking and having fun discovering each and every one of them.”

“Usually, exhibitions tend to be very quiet and still,” said Gaudichon. “But this exhibition is a kind of a paradox. Visitors will see a lot of stuff that’s moving and popping out with different music in every room. That’s because the word flanerie includes the meaning ‘to move.’”

The exhibition is divided in 10 sections, starting from a dark room “Flaneur” that screens several black and white films that have scenes of 19th century Paris or the lifestyles of Parisians. Then the visitors are invited to the rest of the exhibition, by opening the door of a large wardrobe - into the Wanderland.

“Like Alice in Wonderland enters into the Wonderland through a mirror, we are inviting visitors to enter into the Wanderland and experience flanerie like a real Parisian through this wardrobe,” said Le Gall.

Among the differently themed rooms full of objects and wonders, there’s also a special section by Korean graffiti artist Jay Flow, who painted a humorous scene of a Parisian metro.

As a fashion house that stresses the importance of tradition and artisanship, the exhibition collaborated with seven artists from different countries where the exhibition gets held.

The exhibition will leave Seoul on Dec. 11 and go to China and Taiwan. According to Gaudichon, Seoul has been included in the tour as Hermes’ Artistic Director Dumas strongly suggested that it should.

“I took a brief stroll around Seoul and noticed there are a lot of exhibitions and museums exhibiting not only works of local artists but global artists,” said Gaudichon. “By looking at the selection of works and objects on display, I realized that Seoul is very culturally and artistically advanced and it stimulated my interest. I now understand why the artistic director strongly recommended to include Seoul.”

*Hermes’ “Wanderland” exhibition runs until Dec. 11 at the D Museum in Hannam-dong, central Seoul. The exhibition is free. The museum opens at 10 a.m. everyday and closes at 6 p.m. on Mondays, Tuesdays, Wednesdays and Sundays and at 8 p.m. on Thursdays, Fridays and Saturdays. Docent tours take place at 11 a.m. and every hour from 1 p.m. to 5 p.m. For more information, call (02) 542- 6622.