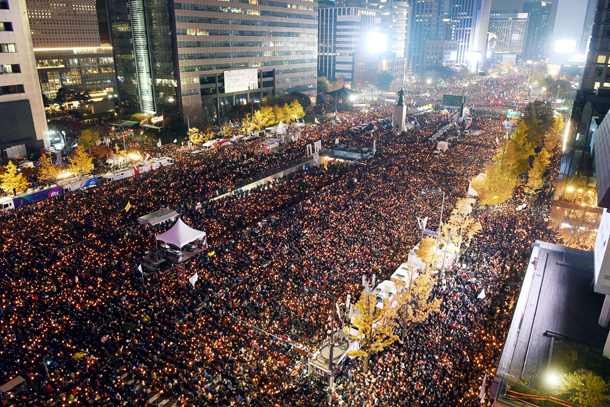 A massive candlelight vigil at Gwanghwamun Sqaure on Nov. 12. [NEWSIS]

The Blue House appears to be changing its attitude significantly since the million-person protest on Nov. 12. Choi Soon-sil, the scandal-ridden confidante of President Park Geun-hye, and three longtime secretaries to Park have long built a wall around the president. But after they were removed, the president seems to have become more accommodating to the recommendations of Blue House aides, including her new chief of staff, than ever before.

Park is frequently meeting with people outside the Blue House. Not only religious leaders but also various figures from society have been invited to the Blue House or so-called safe houses to offer their opinions to the president. It is different from her usual routine of eating meals alone and making orders through phone calls from her residence in the presidential compound. Park has apparently returned to her senses, but it is way too late.

Park’s latest appointments of foreign affairs and culture vice ministers were criticized by opposition parties. “Is it truly your intention to continue running the government?” they asked. They also denounced the appointments, saying they are just a reward for their collaboration in the Choi fallout.

But the truth is different. Vice Foreign Minister Cho Tae-yul was selected as ambassador to the United Nations a long time ago, but the decision was embargoed until an agreement was given.

The nomination of Yu Dong-hun as vice culture minister was also decided a while ago. He is from the public affairs department, not the culture and sports departments, and is a way better candidate than the officials who collaborated in the abuse of power by former Vice Culture Minister Kim Chong and Cha Eun-taek, an associate of Choi.

Now that President Park has become a suspect in the unprecedented abuse of power and influence-peddling scandal, politicians are making different calculations about the way to end Park’s presidency in an orderly manner. Park loyalists fiercely reject the president’s retreat from government because they will face judgment immediately after Park steps down. As they have no viable presidential contender, they must buy time until United Nations Secretary General Ban Ki-moon ends his term and returns to Korea.

Moon Jae-in, a possible presidential contender for the main opposition party, is demanding her immediate resignation. He probably thinks holding an emergency election in two months will benefit him the most, since he has already launched a large-scale campaign and is leading in opinion polls.

Ahn Cheol-soo of the splinter opposition People’s Party also wants Park’s immediate resignation. He wants to split the Saenuri Party and shape a one-on-one battle against Moon in order to win the votes of centrists and conservatives.

The issue is what Park will choose. Former Prime Minister Kim Jong-pil said, “She will withstand even 50 million protesters.” There is an extremely slim possibility that she will voluntarily surrender her power and resign.

The only remaining realistic option is appointing a new prime minister based on an agreement between the ruling and opposition parties and impeaching Park. The new prime minister would serve as acting president while the Constitutional Court deliberates on the impeachment motion.

But we must not give up on a political resolution. In July 1974, U.S. President Richard Nixon tried to find a political resolution after his impeachment was approved by the House of Representatives. As it became clear that the Senate would approve the impeachment, he resigned on Aug. 9, 1974, through a negotiation that guaranteed his pardon. His successor, Gerald Ford, pardoned him a month later.

The rage expressed by the public can be justified. But voters can judge the president every five years through an election and change the administration. The idea that the president must step down unconditionally when a million candles are lit and her approval rating drops to 5 percent is against our constitution. Political circles must work to find realistic answers to the crisis.

Here, the opposition’s role is crucial. The chairwoman of the main opposition Minjoo Party, Choo Mi-ae, said President Park could declare martial law. But opposition parties can nullify it with a majority vote. They have that much power. They must not seek to benefit from massive protest rallies. They must first select a new nonpartisan prime minister and show the people that the state can be run smoothly even without a president.

The public’s outrage reflects their hope for Park’s orderly retreat from government. It is time to consider an alternative path for the president to take just as Nixon chose 40 years ago. Candidates in the next election also need to make their top priority looking into how to monitor and check the president’s power.


*The author is a senior editorial writer for the JoongAng Ilbo.