2016 tourism a record for Korea

2016 tourism a record for Korea 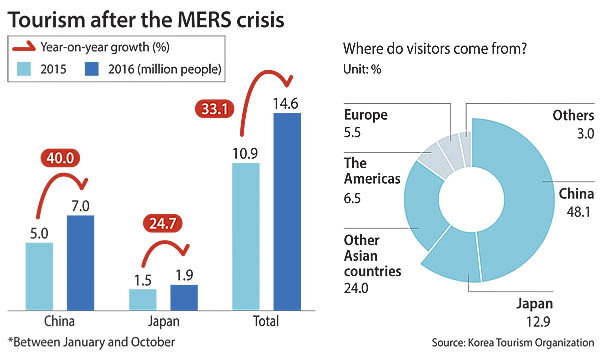 Korea’s tourism numbers have turned around from last year’s Middle East respiratory syndrome (MERS) crisis, as visitors to the country through October posted a 33.1 percent increase from last year and reached an all-time high of 14.6 million, the Korea Tourism Organization revealed Monday.

This is a big recovery from the outbreak of MERS last spring, which caused a sharp drop of 13.3 percent in tourism to Korea during the year’s second half.

It is likely this year’s tourism numbers will surpass 17 million, considering the data compiled until mid-November has already passed 15 million, marking the highest annual number of tourists to date. The previous record was in 2014, when the number hit 14.2 million.

The majority of tourists, around seven million of them, came from China, a 40 percent increase from last year. The Korea Tourism Organization attributed the rise to the larger number of travelers coming by themselves without tour groups.

Travelers from Japan also showed signs of recovery from the MERS crisis. Between January and October, 1.89 million Japanese tourists visited Korea, a 26 percent increase and just slightly under the 1.93 million in 2014.

There were significant boosts from other countries as well, especially in Southeast Asia. The biggest year-on-year growth rate was from Taiwan, where tourism to Korea rose 67.3 percent. Although Taiwanese only make up a mere 4.8 percent of all tourists, the island is fourth on the list after China, Japan and the United States in terms of this year’s visitors.

Vietnam and Indonesia also saw the number of tourists to Korea grow over 50 percent from last year, at 56.1 percent and 53.9 percent.

The tourism numbers from Japan and Southeast Asia are positive signs, especially as the Chinese government continues to build barriers against Korean tourism, reportedly in political retaliation against Korea’s deployment of a U.S.-led missile defense system. Last month, the Chinese government was reported to have issued orders to its provincial tourism agencies to reduce the number of low-cost group tours to Korea by 20 percent.

Chinese tourists have always been a key demographic in Korea’s tourism-related industries, including retail and duty free. Through October this year, they made up 48.1 percent of all foreigners visiting Korea, topping the list and far outranking second-place Japan with 12.9 percent.

To prepare for the possible shrink in the number of Chinese travelers and reduce the industry’s dependence on a single country, the Korean government has been making efforts to diversify the travelers coming to the country. “In August, we conducted market research on major countries in order to improve marketing strategies tailored to each one according to their preferred tourism style for next year,” a Korea Tourism Organization spokesman said.

The organization has expanded support to bring in more incentive tours from Japan and Southeast Asia. Incentive tours are travel programs granted by companies as a reward to their employees for hard work. Usually organized in large groups numbering up to the thousands, they include educational and cultural programs as part of the course.

China sends the most incentive tour groups to Korea, but to boost similar tours from Japan and Southeast Asia, the government recently lowered the minimum level of visitors required to file for support on preliminary visits made by incentive tour organizers from 1,000 to 500, exclusively to these countries. The Korea Tourism Organization will provide benefits in the form of guides, transportation and accommodations for these groups upon request.

“Incentive tour groups from China frequently outnumber 1,000 whereas those from other countries rarely reach that number,” said another organization spokesman. “So we thought easing the minimum level would increase the number of preliminary visitors who organize such visits and hence the number of incentive tours themselves.”