Samsung and Harman to focus on future cars

Samsung and Harman to focus on future cars 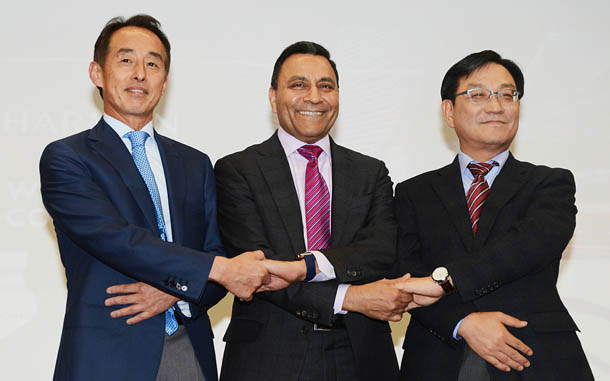 Samsung Electronics emphasized Monday that its acquisition of Harman International Industries, an American automotive components supplier, was about developing new technology and applications for futuristic cars rather than entering into car manufacturing.

The two companies brushed off concerns that the surprise deal - the biggest overseas acquisition in Korean corporate history - was merely to build a foundation for Samsung’s foray into traditional automaking.

“Young Sohn [president and chief strategy officer of Samsung] and I have visited many, many key automotive customers including Hyundai in the past week,” Harman CEO Dinesh Paliwak said in a joint press conference at Samsung Electronics’ Seocho headquarters in southern Seoul on Monday. “We made it very clear that Samsung, by acquiring Harman, wants to be the No. 1 primary solution supplier of smart mobility, control sensor service delivery to cars.”

He added that the reaction from clients was mostly “very positive” and they were excited to see future synergy resulting from the Samsung-Harman deal, which is scheduled for completion by September next year.

Paliwak visited Seoul to attend a series of meetings with executives at Samsung as well as Hyundai. He said a meeting with Samsung Electronics Vice President Lee Jae-yong was scheduled later in the day, adding that he never had an occasion to meet with the de facto head of Samsung over the course of negotiations for the deal.

“Our clients will be carmakers. There is no chance that Samsung spent $8 billion to enter into the realm of our customers,” said Park Jong-hwan, head of the automotive division at Samsung. “It’s counterproof that we [Samsung] have no intention of entering the car manufacturing business.”

Park also drew a distinction between what Samsung is trying to do with Harman and what Apple and Google have been trying to do with their hefty investment in autonomous driving and operating systems for cars. “Whereas Apple and Google wish to capitalize on their software platform and know-how, we are trying to be quicker in coming up with components for our clients and become a new kind of tier-1 provider to the original equipment manufacturers.”

The automobiles of the future will be much different from today’s, Sohn noted, and will be about more user experience, connectivity and autonomous driving as cars transition from “moving transportation” to “smart transportation,” points where the two companies might create synergy.

The Harman CEO said the two companies share the same culture of innovation and speed. “Harman brands have a very strong automotive portfolio whereas Samsung has strength in processors, memory, displays, user interface and 5G connectivity, which is very important for telematics technologies,” Paliwak said.

On expectations that Samsung will one day introduce a Galaxy smartphone embedded with one of Harman’s audio brands, Park said the product would come out in 2018 at the earliest.