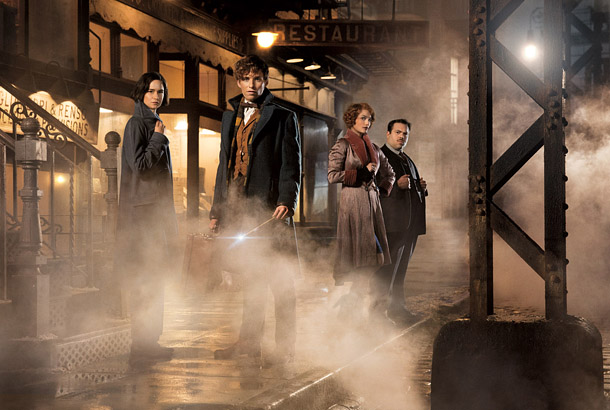 “Fantastic Beasts and Where to Find Them,” which is the latest movie from the Harry Potter universe, dominated the local box office by accounting for 68.1 percent of all ticket sales. [WARNER BROS. KOREA]

The long-awaited return to the wizarding world of J.K. Rowling ruled the local box office over the weekend. According to the Korean Film Council on Monday, the newly-released “Fantastic Beasts and Where to Find Them” notched an impressive 1.4 million tickets sold at 1,431 theaters from Friday to Sunday, accounting for 68.1 percent of the total weekend ticket sales. In its first weekend, the fantasy flick raked in 12.57 billion won ($11.27 million), making a total of 16.72 billion won since its release on Wednesday.

The latest movie from the Harry Potter universe centers on an England-based magizoologist Newt Scamander (Eddie Redmayne), who visits New York in 1926 with a suitcase filled with mysterious creatures. The story unfolds as few of his animals escape the suitcase and cause problems that may expose magicians to the Non-majs, or American muggles.

Directed by David Yates, who previously helmed four of the seven Harry Potter installments, the Warner Bros. Korea-distributed film was able to broaden the spectrum of its audiences by arriving in theaters the day before Korea’s Scholastic Ability Test.

Local fantasy-romance film “Vanishing Time: A Boy Who Returned,” about the innocent love between two elementary-aged students, came in second in its first weekend. Despite starring the A-list actor Gang Dong-won, whose hits include “A Violent Prosecutor” (2016) and “The Priests” (2015), the film was only able to sell 208,000 tickets behind the success of J.K. Rowling’s newest work.

However, it was able to push out Marvel’s hero fantasy “Doctor Strange,” which slipped to third in its fourth weekend, selling 193,000 tickets.

“Luck-Key” followed in fifth by selling 49,500 tickets. Featuring actor Yu Hae-jin, the local action-comedy managed to round out the top five in its sixth weekend.

The horror movie “Ouija: Origin of Evil” ranked sixth, which was followed by the Japanese animated film “Gamba.”

Another Japanese animated film “Haikyu!! The Movie-The End and the Beginning” ranked eighth, and was followed by the documentary “Moo-hyun, the Story of Two Cities,” which depicts the life of the late President Roh Moo-hyun.

The Taiwanese romance flick “At Cafe 6” debuted at tenth.