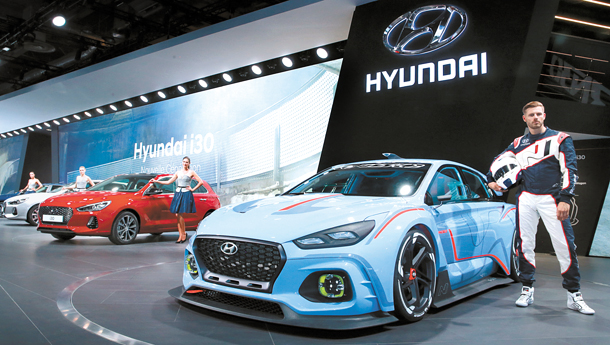 Hyundai Motor reveals its RN30, a high-performance racing concept model, at the 2016 Paris Motor Show in October. The RN30 is a preview of the upcoming i30 N, the first product to be released under Hyundai’s N performance brand. [HYUNDAI MOTOR GROUP]

Through its aggressive globalization strategy and continuous investment in research and development, Hyundai Motor Group has grown to become a powerful global automaker. The company has enhanced product competitiveness through quality management, expanded overseas exports and established global networks.

With more than eight million sales worldwide in 2014, Hyundai Motor Group has taken its place as a top five global automaker. But a global economic recession, the sudden market entry of Chinese car companies and intensified competition in technology have once again put Hyundai Motor Group in a position where it needs to make another leap forward.

To overcome a difficult business environment and stay ahead of the competition in the future automobile market, Hyundai Motor Group is pushing forth a new business growth plan to capture the luxury car market, lead the green and smart car markets and strengthen its global networks.

Genesis for the luxury market

The intention is to respond quickly in the fast-growing market for luxury cars and develop a premium auto brand that can compete shoulder to shoulder with other global car companies.

Hyundai Motor is making a company-wide effort to successfully launch the new Genesis model, the EQ900, which will determine whether the brand can hold its place and settle quickly in the global market.

The EQ900 is the first model launched under the Genesis brand, with competitiveness on par with luxury import models in the Korean market. After its first release in 2015, a total of 11,726 cars were sold, and it has been enjoying constant popularity after its official launch this year, as an average of 2,800 have been sold per month.

As for the American market, where competition in luxury cars is fiercest, the Genesis took second place in sales, selling 2,532 cars in just one month last February. This figure surpassed that of the Mercedes-Benz E-Class, which sold 2,362.

In March, 3,197 Genesis vehicles were sold, a 32.4 percent increase from the same month last year. This indicates the Genesis has been competing shoulder to shoulder with premium German auto brands such as Mercedes-Benz since its release and is widening its position in the American luxury car market.

The Genesis will expand its product line to cover six types of vehicles including midsize luxury sedans and sport utility vehicles by 2020. To enhance product competitiveness, a new product team was formed to work exclusively on Genesis vehicles. 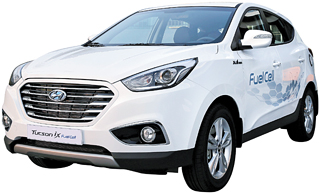 To take the lead in the future car industry and overcome fierce competition in the market, Hyundai Motor Group looks to the field of eco-friendly cars.

Hyundai Motor most recently released the Ioniq Electric in June, which provides the longest driving distance on a single charge at 191 kilometers (119 miles). The automaker will add a plug-in hybrid model to the Ioniq line by the end of this year.

With Tesla Motors’ upcoming introduction of its Model 3 and continued development of electric vehicle batteries, the electric car has been recognized as the new eco-friendly vehicle of the next generation, and Hyundai Motor Group is especially pursuing competitiveness in the electric car market.

In 2010, Hyundai Motor Group first demonstrated the Tucson ix as a self-driving car. The vehicle successfully completed a test drive on both paved and unpaved roads with nine self-driving missions such as checkpoints, crosswalks and damaged sections where the car had to automatically stop. It was the beginning of self-driving car development work in Korea.

Since then, Hyundai Motor Group has been applying various new related technologies on its mass-produced vehicles through continuous development. In December 2015, the company introduced an advanced driver assistance system called Genesis Smart Sense when it launched the Genesis EQ900.

Genesis Smart Sense includes the latest driver assistance technology that can detect the possibility of an accident beforehand and help drivers navigate safely. This includes a system to aid drivers on highways and help avoid collisions.

During the Creative Korea Expo in November 2015, Hyundai Motor Group demonstrated its self-driving technology in actual traffic for the first time. The self-driving car carried Minister of Science, ICT and Planning Choi Yang-hee in the driver’s seat from the north end of Yeongdong-daero, a major boulevard in southern Seoul, to the COEX exhibition hall, where the expo was being held.

During the demonstration, the self-driving car showed its ability to keep up with traffic, overtake slow vehicles and return back to its traffic lane and recognize pedestrians in the way.

By 2020, Hyundai Motor Group aims to develop higher-level self-driving technology and looks to commercialize a completely self-driving vehicle by 2030.

By adopting an aggressive global networking strategy all throughout the process from development and manufacturing to sales and maintenance, Hyundai Motor Group has quickly risen to become a global automaker and expanded its overseas offices to meet global demand.

Recently, Kia Motors built a manufacturing facility in Nuevo Leon, Mexico, to target the Latin American market, which many recognize as a new growing market. Mexico is the fourth country where Kia Motors has established a factory, after the United States, China and Slovakia. The company began mass production of its K3 model in Mexico, which is being released as the Forte in the local market.

Hyundai Motor, too, has plants in various locations overseas to manufacture and sell vehicles that correspond to local needs, including in Turkey, India, the Czech Republic, China, the United States, Russia and Brazil. These factories strategically manufacture different automobiles that are the most popular in their respective country to target local customers.

This year, Hyundai Motor has constructed two more factories in the Chinese cities of Cangzhou and Chongqing, even though it already runs three plants in the country. These factories each have the ability to produce 300,000 automobiles per year and will begin operations in 2018. With the Cangzhou and Chongqing facilities, Hyundai Motor will have secured manufacturing points in the northern, eastern and midwestern parts of China.