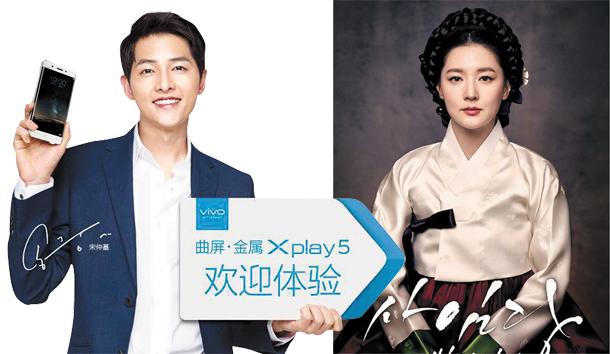 Left: Song Joong-ki in an advertisement for VIVO, a Chinese smartphone brand. A Chinese actor later replaced him. Right: Lee Young-ae in a poster for the upcoming drama “Saimdang, Light’s Diary,” which might no longer be aired in China. [JOONGANG PHOTO]

BEIJING - Beijing ordered local broadcasters not to air Korean dramas, movies or entertainment shows in apparent retaliation for Seoul’s rush to deploy a U.S.-led antimissile defense system in less than a year, according to multiple sources in China.

If true, it would be China’s toughest ban imposed on South Korea’s entertainment business so far. Ever since Seoul and Washington jointly announced their decision on July 8 to deploy the Terminal High Altitude Area Defense (Thaad) system on South Korean soil, Beijing has been blacklisting Korean entertainers, though not officially.

The Chinese government has recently ordered local broadcasters not to air Korean dramas, movies, entertainment shows or Chinese remade versions of Korean content, according to EntGroup, a Chinese entertainment market researcher, on Sunday.

Korean projects that already passed all legal procedures to be aired on Chinese TV will be excluded from the new rule, the researcher quoted the government as saying, adding that broadcasters are now “waiting” for the official papers to arrive detailing the ban.

A producer in Jiangsu Province received an order from the government not to hire any Korean celebrities on his show, according to Weishi Guanchasheng (Chinese for “television viewer”), a popular entertainment writer on the Chinese microblogging site Weibo.

“It’s an urgent matter,” the user wrote. “All broadcasters have been spurred into action.”

Chuanmeiquan, which translates as “media circle,” a Chinese news portal that focuses on Chinese entertainment, reported Sunday that the country’s ban on Korean acts have “finally come to light,” and that everyone in showbiz is “waiting for official government papers to arrive.”

According to sources, the latest ban will block Korean companies from jointly producing dramas and entertainment shows with their Chinese counterparts, Chinese broadcasters from airing shows that feature Korean celebrities, Korean agencies from organizing idol concerts in China gathering 10,000 guests or more and Chinese companies from investing in Korean agencies.

Actor Song Joong-ki, the male lead in the “Descendants from the Sun” (2016), appears to have been affected by the measure when he was swapped with a Chinese actor in a TV ad for VIVO, a leading smartphone brand in China, earlier this month.

Events in China with K-pop and K-drama stars, including boy band EXO, have already been cancelled, affecting the stock prices of K-pop management companies including SM, YG and JYP.

In August, a Chinese TV show deleted scenes featuring Korean singer Hwang Chi-yeul or blocked his image with subtitles and pixilation. His name was also absent from the credits at the end of the show.

Gen. Vincent K. Brooks, commander of the U.S. Forces Korea, said earlier this month during a military seminar in central Seoul that the anti-missile system will be deployed within eight to 10 months.

Both China and Russia have expressed strong opposition to the deployment, saying it would compromise their strategic security interests. They have especially been concerned that the Thaad’s powerful X-Band radar could be used to spy on their territories.