Images of president and her father desecrated

Images of president and her father desecrated 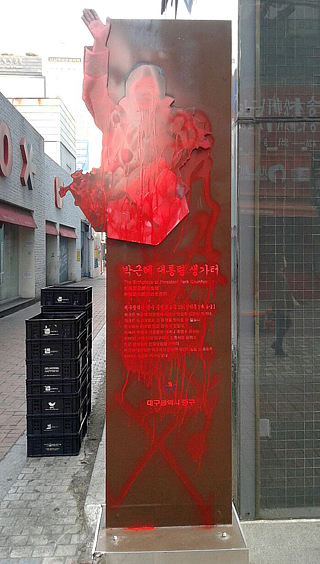 The monument set up to honor President Park Geun-hye in her birthplace in Daegu was spray-painted on Friday. [KIM YOUN-HO]

Police apprehended two suspects who spray-painted the statues and monuments of former President Park Chung Hee and his daughter, current President Park Geun-hye, in their hometowns, an act among many found throughout the country in the midst of mounting public anger against the president over the corruption scandal surrounding her and her friend, Choi Soon-sil.

Police on Monday apprehended the suspect who spray-painted the word “dictator” on the statue of Park Chung Hee that stands near the house of his birth in Gumi, North Gyeongsang.

“I did it because I was angry that we are honoring a former president who was a dictator,” said the 19-year-old college student.

Gumi police apprehended the student on Monday after he spray-painted the statue and other monuments near Park’s birthplace in the wee hours of Nov. 4. Police also apprehended on Sunday a suspect who spray-painted a monument set up to honor President Park Geun-hye in her birthplace in Daegu. Local police booked the suspect, a 50-year-old man, without detention.

The monument is a signboard in front of a building where the house Park was born in used to stand. It was set up by the Jung District Office in February of 2013 to celebrate Park’s inauguration. According to police, at around 2 a.m. on Friday the man covered the board in red spray-paint. A flat depiction of Park on the board where she is seen waving and smiling was also completely painted in red.

“I was angry about the Choi Soon-sil scandal,” the man told police. “I participated in a candlelight vigil, then got drunk and did it.”

The board was beyond repair and was taken down by an employee of the district office on Friday morning.

“The local residents’ vote for Park did not only stand for the people’s trust in Park but in her father, as well,” said Kim Seon-woo, a director of an emergency coalition of members of opposition parties and civic groups in Daegu.

“This trust thus betrayed in the national scandal turned into anger, and now is leading to such violence against monuments.”

Park’s friend, Choi Soon-sil, is accused of meddling in top state affairs, influencing personnel appointments, gaining access to state secrets and strong-arming conglomerates into giving extravagant funds to two foundations linked to Choi and Park. Prosecutors on Sunday indicted Choi and booked Park as a suspect in the scandal.

Nearly one million people gathered in central Seoul and throughout the country on Saturday, demanding Park’s resignation. It was the fourth mass rally of its kind.

Also damaged was an information board titled “The 18th President of Republic of Korea, Park Geun-hye, Visits Daewangam Park in Ulsan,” which showed a large photo of Park. It was removed after someone scratched out Park’s face.

The local district office said it has no plans to set up a replacement signboard.

Another similar information board set up in front of the Sipridae Forest in Ulsan also showed Park’s face. The photo was stabbed with sharp objects. Restaurants and stores that Park visited during her holidays have been taking down images of her at their establishments.

“Customers would swear at the photos of Park and threaten not to buy fruits from my store,” said a 54-year-old owner of a fruit store in Shinjeong Market in Nam District. “I took them all down early this month.”

In the Seomun Market of Cheongju, North Chungcheong, where Park visited in 2014, eight out of nine restaurants that used to hang Park’s photos have since removed them.